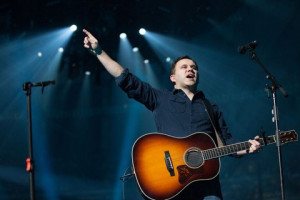 The reasons to celebrate continue to add up for sixstepsrecords’ acclaimed worship leaderMatt Redman. This year alone, Redman’s powerful single “10,000 Reasons (Bless The Lord)” has been certified Digital Gold by the RIAA, earned two GRAMMY® awards and is nominated for K-LOVE Fan Awards’ “Song of The Year.”

The song is also up for “Top Christian Song” at the Billboard Music Awards, one of two nods for Redman for the award show. Adding to the worship anthem’s impressive honors came earlier this week when it was named ASCAP’s Christian Music Song of the Year at Monday night’s ASCAP Christian Awards at the Franklin Theatre.

“I love watching the journey a song can go on,” says Redman. “We wrote ‘10,000 Reasons’ in a tiny little chapel in the English village I live in, and it’s been a big blessing to see if fly around so many churches and radio – and then to receive an encouragement like this. Huge thanks to ASCAP for the award.”

Momentum continues for Redman as he is set to record a brand new worship album at Passion City Church’s ‘LIFT: A Worship Leader Collective’ in Atlanta, GA from May 31 – June. 1. Hosted by Louie Giglio and GRAMMY® winner Chris Tomlin, the event will bring together worship leaders from across the country. Redman’s forthcoming project will be a live recording from the event, following suit with 10,000 Reasons, wihch was recorded at the LIFT gathering in 2011. The new album will release on Sept. 24.

About Matt Redman:
Matt Redman’s songwriting is synonymous with integrity and continues to impact churches around the world. Leading a generation of worshipers, his songs have been recorded by Chris Tomlin, Michael W. Smith, David Crowder*Band, Israel Houghton, Jeremy Camp, Jesus Culture and Passion, among others. A key songwriter for today’s church and active worship leader for Passion conferences around the world, Redman’s long history of success includes garnering eight Gospel Music Association Dove Awards and four GRAMMY® nominations. This year he won his first GRAMMY® awards for the powerful hit song, “10,000 Reasons (Bless The Lord)” which won for “Best Gospel/Contemporary Christian Music Performance” and “Best Contemporary Christian Music Song.” Among artists Frank Ocean, fun., Mumford & Sons, Chick Corea and Esperanza Spalding, Redman was only one of six artists with two GRAMMY® wins at the award show. “10,000 Reasons (Bless The Lord)” has spent 19 weeks at No. 1 and over 30 non-consecutive weeks in the Top 5 on Billboard’s Christian/Gospel Digital Songs chart. His first Essential Collection titled Sing Like Never Before was released late last year and brings together some of his favorite classics into one compilation album. Additionally, Redman has 26 songs in the CCLI Top 500, with six populating the Top 50. Redman is currently up for two Billboard Music Awards for “Top Christian Artist” and “Top Christian Song” for his hit, “10,000 Reasons (Bless The Lord).”