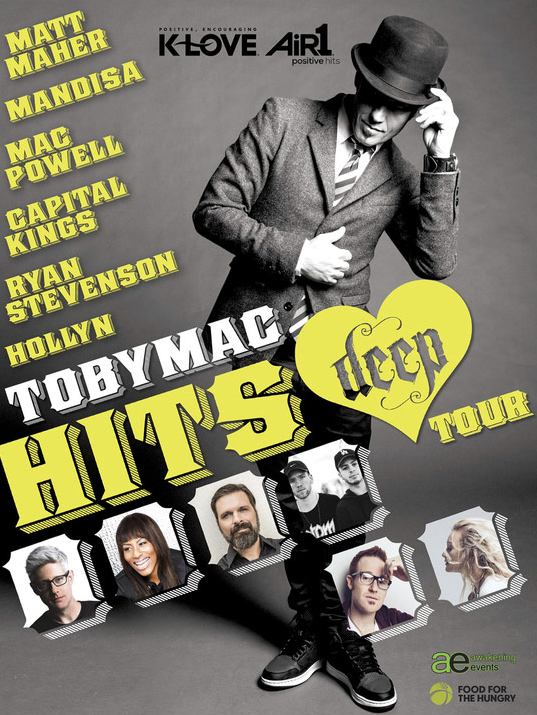 Announced on K-LOVE/AIR1, TobyMac shared the diverse line-up for his 2017 “HITS DEEP Tour” including Matt Maher, Mandisa, Mac Powell from Third Day, Capital Kings, Ryan Stevenson and Hollyn who will join him on a trek of over 30 arenas across the U.S. presented by K-LOVE/AIR1, Food for the Hungry and Awakening Events. Tickets for the 2017 “HITS DEEP Tour” will go on sale on Sept. 23.

Through a partnership with Food for the Hungry, concertgoers sponsored over 15,000 children, providing food, a better education, clean water and medical treatment.

“It’s an amazing partnership that we have with K-LOVE/Air1, Awakening Events and Food for the Hungry, it takes us where I think our music should be—in the heart of our cities in the biggest arenas in town,” explains TobyMac. “I always get excited when it’s time to create the ‘HITS DEEP Tour’ line-up. I love the idea of putting together artists that are just starting their journey with veterans, electronic artists with organic artistry and colors of skin that demonstrate God’s diverse kingdom. We come together backstage – which leads us to a beautiful night on stage. A night deep in hits, that aims to hit you deep. A night where everybody is invited to the party!”

Known for his dynamic live show, the HITS DEEP LIVE CD/DVD (Nov. 18) will feature a full live album and concert video of 16 songs recorded on his highly acclaimed and sold-out “HITS DEEP Tour.” This will mark the Billboard Music Award winner’s first live album in eight years. THIS IS NOT A TEST, the American Music Award’s winner latest LP, continues to have an unstoppable year earning a GRAMMY® Award, a Billboard Music Award nod, three upcoming GMA Dove Award nominations and two back-to-back No. 1 hits at Christian radio, “Backseat Driver” and “Move (Keep Walkin’)” with tour dates across Europe, Canada and the U.S..

“This partnership is so special and unique between TobyMac, Dan Fife at Awakening Events and our team at K-LOVE Radio – it’s a privilege to be a part of the 2017 ‘HITS DEEP Tour,’” shares David Pierce, Chief Creative Officer of K–LOVE Radio. “K-LOVE is all about making a positive impact in peoples lives, and helping them to grow closer to Jesus. The heart of this tour is exactly that, to impact lives and make room for God to work! 2016 ‘HITS DEEP Tour’ was amazing to see arena after arena sold out! It was awesome and we’re excited and can’t wait for the 2017 ‘HITS DEEP Tour’ to begin!”

“TobyMac & the Diverse City Band continue to provide audiences with an amazing concert experience, that encourages all walks of life to live in unity and to be Jesus Freaks,” adds Dan Fife, Awakening Events. “Partnering together with TobyMac and K-LOVE/AIR1 means more people are coming together and hearing. It’s an honor to be a part of the ‘HITS DEEP Tour’ with TobyMac, his team and our friends at K-LOVE/AIR1.”