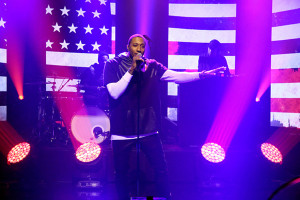 The Tonight Show host Jimmy Fallon invited Christian rapper Lecrae back for an encore appearance on the show. This time Lecrae got the time to do a full performance set for the song “Welcome to America.”

The song that Lecrae chose to perform had cross appeal that addressed several issues going on in America. “Welcome to America” touches on many political issues, including slavery, taxes, guns, drugs and corporations.

A notable verse reads, “All I know is drugs and rap / I probably could have been some kinda doctor / Instead of holdin’ guns and crack / I was born in the mainland / Great-grandpa from a strange land / He was stripped away and given bricks to lay / I guess you could say he a slave here / But I was made in America / So I don’t know a thing about that / All I know is Uncle Sam lookin’ for me working on his corner so I know I gotta pay tax / Getting paid in America / I was raised in America / And this is all I ever known / If I’m wrong then you better come save me America.”

Lecrae ended the performance with a suggestion to the audience, advising fans to “go see Selma,” shouting out the civil rights movie.

Lecrae is one of only a few artists to ever hit #1 on the Christian and Billboard Top 200 list. He’s nominated for 3 Grammy’s in 2015.

Watch his performance on The Tonight Show: