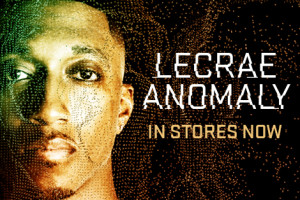 Early numbers are in and Monday when our Billboard Top 10 report comes out Lecrae will be on top of the music world!

Billboard.com has confirmed that the Gospel rappers album ‘Anomaly’ not only leads in the Gospel/Christian music categories, but he’s also on top of all music genres on the Billboard Top 200; Beating out mega rock stars like Maroon 5.

Only a handful of Christian Contemporary artists have ever achieved this, and no Gospel artist has ever outsold the music industry debuting in the top 200 until now.

Lecrae’s stardom and popularity is at the cusp of the growing music genre that is Gospel rap/hip hop. It’s safe to say Gospel Rap has arrived.

Read the complete article by Billboard.com