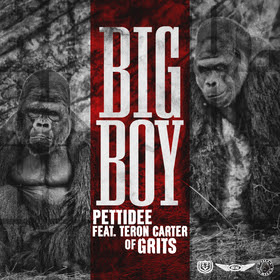 Recording artist PETTIDEE (Dewayne Petty) has been building a fan base around the world for fifteen years. He is a Grammy®, Stellar and Dove Award nominated Christian Rapper who brazenly puts everything into his music.

From his debut release STILL ALIVE in 1999 to his 2013 promo release Kill The Messengers Mixtape feat. Dj Dex, Pettidee has contributed not only award worthy projects and chart topping hits, but helped shaped the genre of Christian Rap and Hip Hop into a thriving division of music that demands the mainstream ear and a growing global respect.

Over the span of his career, Pettidee faithfully released a new album every twelve to eighteen months. But, it’s been almost 4 years since the growling rapper released a full commercial project. “Since the 2010 release of RACE 2 NOWHERE I’ve had a lot on my plate as a businessman, husband, and father of two teens,” he shares. “Now instead of making ten small moves, I stop, plan it out, and make that one crucial move that is worth ten.” That business model has been one of the keys to his longevity in this industry and because of his diligence to continue to diversify his talent and brand.

With new and innovative platforms to share and sell music, artists must continue to think unconventionally and multi-dimensionally about shaping their careers. Creating music for retail purposes alone has become an archaic way of marketing music. “I’ve been doing a whole lot of music features (too many to name), some acting, and cultivating more unorthodox ways to get my music to the public,” Pettidee explains. His music has been featured on television shows CSI: Miami, Pimp My Ride (MTV), Tyra Banks’ hit show America’s Next Top Model, Tyler Perry’s Meet The Browns, FX’s Sons Of Anarchy and in the feature film Hurricane Season starring Forrest Whittaker.

Pettidee is one of those rare artists who can give you club bangin’ beats, radical rock, dancehall reggae and smooth grooving all on one album effortlessly soldered together by his signature beefy voice. He’s been collaborating with new producers to perfect his sound and has returned with a new single release.

“Big Boy” is Pettidee’s all new single that demands max volume and the bass to jump. The track is scorching, has a simply contagious hook, and is dusted with Pettidee’s ingenious and poignant lyrics. “Big Boy” also features a guest appearance by Teron Carter of the multi-award winning group Grits who recently received RIAA Gold certification for their single “Ohh Ahh” (ft TobyMac) for its 500,000 sales and on demand streams.