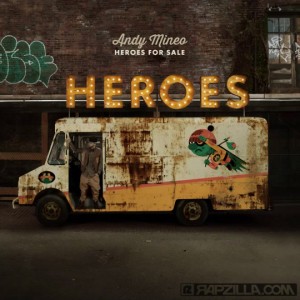 Heroes for Sale blends a variety Mineo’s musical influences including hymns, heavy metal, hip-hop, and classical while unveiling a personal side of the hip hop artist. Mineo strips back layers of his own life in Heroes for Sale and gets real with his audience to reveal his authentic self, letting them see into his brokenness in hopes that they will identify with that.

The result is an 16-track album echoing bold messages and infectious beats. Birthed from Mineo’s collaboration with highly-acclaimed artists such as the GRAMMY ® Award winning Lecrae, Trip Lee, Christon Gray and Dove Award and GRAMMY nominee Flame, the project opens with the classical hymn, “I Will Rise and Go to Jesus,” setting the stage for the remaining tracks.

When describing the message behind Heroes for Sale, Mineo states, “We make heroes out of a lot of things. We make heroes out of people. We believe ourselves to be greater than we really are. We make ourselves look like heroes to other people. What I really wanted to do is show the brokenness of the heroes that we create and the heroes that we try to be in order to show that there is ultimately only one great hero.” No newcomer to the Christian music scene, Mineo got his start touring with T.R.U.C.E., an urban ministry that focused on evangelism via performing arts and began making a name for himself with such projects as Sin is Wack Vol. 1. He’s been featured on Ambassador’s Stop the Funeral, Flame’s Captured Lecrae’s Background and more.

The first single from the spring release, “A Yo,” is currently impacting radio. The music video made its world premiere on ReachRecords.com earlier this year and will be added to select television broadcasts in the weeks to come.

“I want to combine the message that I believe in deeply with the catchiness of these hip hop songs and choruses,” says Mineo. “I really think it makes a powerful combination to speak to the hearts of people all over the world.”

For more information on Andy Mineo and Heroes for Sale, please go to http://reachrecords.com/artists/show/Andy-Mineo-.