TobyMac helped pioneer Christian music and bring it to its biggest transition of growth with his super group DC Talk in the 80s and 90s, and again as a solo artist in the 2000s. He has influenced the next generation of gospel music, including Lecrae.

Toby has never been one to shy away from professing his love for Christ through his actions and his music, however, it was his days listening to early hip-hop in the 80s that turned him into the artist he is today.

In his interview with the Christian Post, Toby was asked to list his top five rappers of all time, and although his picks are not from Christian music, you can see how each of them impacted the way he does his music allowing him to put a Godly spin on it.

“I think Rakim [No. 1]. I like some old school junk. KRS-One. I know it’s on the lighter side, Whoodini. I know they weren’t about conscious rhymes but they taught me about how to mix singing with rap. They would always have the singing [in songs], ‘the freaks come out at night…’ You know they really taught me something more than they were some kind of conscious emcees,” he said.

He said “Q-Tip” from A Tribe Called Quest was his number four on the list before breaking into newer rappers Jay-Z and Kanye West.

“I mean I know it’s real controversial, but it’s hard not to say Jay-Z. I mean I would say I put Jay-Z and Kanye right there. I know some people would kill me for saying that. Jay-Z for his changing the game and Kanye for his experimentation,” he said before setting a little warning. “I do not agree with everything they say. I do not like the vulgarity. I always get the clean version, and I do not suggest that anybody go out and buy it because there’s a lot that they talk about that I don’t think is good for younger ears.” 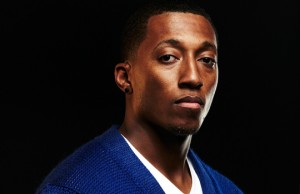 “Ability plus heart, I’d put Lecrae on that list. It’s easier for me to listen to him because I feel like our hearts are in the same place because we desire the same things generally.”

“I think there are so many artists out there who are expressing their faith through hip-hop and their beliefs through hip-hop, and I find more and more mainstream artists talk about their love for God through hip-hop. But then there’s a movement that’s happening with Lecrae and those guys that are making people just stop and notice,” he said regarding the new movement of mainstream Christian hip-hop.

“We’ve always had some great hip-hop groups along the way from Grits to any other groups in the 90s and 2000s. To me they are doing it and they’re not compromising and people are stopping and noticing and appreciating them for what they do. It reminds me a little bit of when DC Talk, when I wrote “Jesus Freak,” I think people recognized it for how bold the statement was. There was no watering it down, there was no underlying message. It was a bold message and a blatant message, and that’s the way I see Lecrae and those guys. They are not two stepping this thing or half stepping, they are not treading lightly on this Jesus thing, and I love it,” he continued.