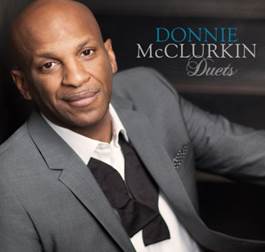 A little help from a friend can go a long way when your friend happens to be the host on highly popular national morning radio show.

Steve Harvey, author, national talk and game show host recently invited gospel singer Donnie McClurkin on The Steve Harvey Morning Show to promote his current album, Duets and chat about his BET nomination and other upcoming appearances. A normal interview took an unexpected turn when Harvey decided to take promotions into his own hands. He made a personal plea to his listeners to go to iTunes and purchase McClurkin’s new CD Duets on RCA Inspiration. Harvey along with his other on air co-hosts all purchased a copy as well. Within minutes Duets began to climbs the charts on iTunes and landed in the #1 spot on Gospel and Christian Charts and #15 on iTunes Top 100 where it remained for the entire day. McClurkin now holds the #2 slot.

“I was so overwhelmed by what Steve did on the air I had a loss for words. That was such an unexpected and selfless act on his part. It was humbling and very much appreciated,” says McClurkin.

McClurkin is also set to perform a song from Duets on The Steve Harvey Show on Wednesday, June 6 which airs weekdays on NBC. On Sunday June 29 fans can tune into the BET Awards airing live from the L.A. Nokia Theatre at 8pm when the Best Gospel Artist will be announced. Nominated in this year’s category: McClurkin, Erica, Campbell, Tye Tribbett, Tamela Mann and Hezekiah Walker. And it doesn’t stop there McClurkin joins in the celebration of Essence Music Festival’s 25th Anniversary as host of the All- Star Gospel Tribute on July 6.