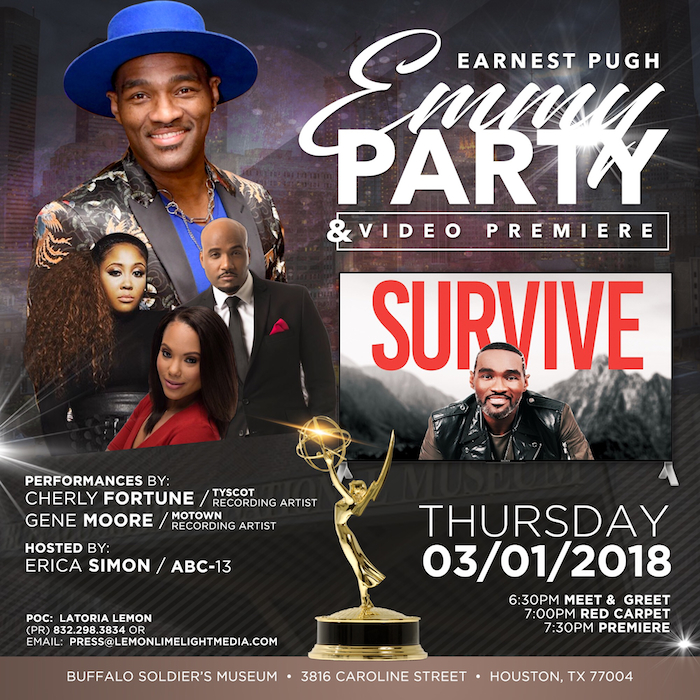 The celebration kicks off with a 6:30 PM Meet-and-Greet, which will be followed by a 7:00 PM red carpet stroll. The main program begins at 7:30 PM with Blacksmoke Music Worldwide CEO, Kerry Douglas, debuting the a new concept music video for Pugh’s radio smash, Survive,” which is No.14 on this week’s Billboard Gospel Airplay chart. Top Ten recording artist, Cheryl Fortune, will perform, as will, Motown Gospel recording artist, Gene Moore. Houston’s News Channel 13 news anchor, Erica Bennett, will host the festivities.

The evening will close with Pugh sharing remarks about his experience and participation in the television program, “The 34th Annual Black Music and the Civil Rights Movement Concert: A Tribute to Rev. Dr. Martin Luther King, Jr.,” in which he starred alongside Malik Yoba, B.Slade and Bilal. The special presentation won the Dallas-based CBS affiliate, KTXA Channel 21, an Emmy Award in the category of Special Event Coverage (Other Than News or Sports). Pugh will also honor the producer of the musical, Curtis King, founder of The Black Academy of Arts & Letters in Dallas, TX.