Most singers and musicians often dream of one day performing at Carnegie Hall and that dream recently came true for gospel recording artist Donnie McClurkin. The Hall was filled to the top tier on a Wednesday night and the audience arrived ready to sing along with two of gospel music’s premier vocalists.

McClurkin and the dynamic Kim Burrell definitely didn’t disappoint the audience at the highly anticipated Gospel Sing Along in the Isaac Stern Auditorium/Ronald O. Perelman Stage located in the legendary Carnegie Hall.

The evening featured some of McClurkin’s classics like, “I Call You Faithful,” “We Fall Down” and of course, “Stand.” Both McClurkin and Burrell united their voices to create a beautiful collaboration on classics like, “What the World Needs Now Is Love” and “Reach Out and Touch.”

“Appearing at Carnegie Hall was a big night for all involved; it was a major accomplishment in my musical career and a personal landmark. God continues to amaze me,” says McClurkin.

Making a surprise guest appearance in the second half of concert after intermission was New Jersey’s very own, Cissy Houston. Houston added some holiday cheer to the night by performing a Christmas standard “Silent Night.” 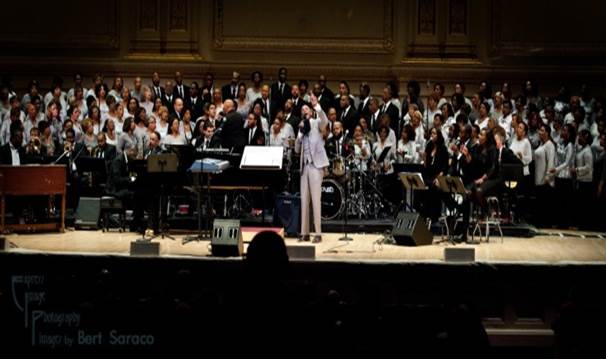 The Gospel Sing Along was produced by Vivian Scott Chew. As founder and principal of Time Zone International, she stands as an innovative figure in the music and entertainment industry. Ray Chew served as the Musical Director and surprised the audience by joining in the sing along throughout the night. Chew’s music direction is sought after for prestigious music specials and historic landmark events, including the 65th Primetime Emmy Awards, the 2015 Grammy Awards Premiere Ceremony, the 2008 Democratic National Convention, The President’s Inaugural Neighborhood Ball and the 44th Annual NAACP Image Awards. Now he can add the successful Gospel Sing Along at Carnegie Hall to the list.