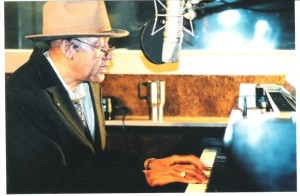 Born in Indianola, MS on March 12, 1945, to Otis and Letha Jackson, George moved with his family in 1950 to Greenville, MS, grew up there, and dedicated his life to Christ at an early age.

George spent his teen years listening as the radio played records by the fabulous gospel groups and soul singers who frequented the Mississippi River Delta towns. George always had a song on his mind. His career in music began in the early 60’s as an active vocalist and songwriter in Memphis, where he made his home for the next 26 years.

In 1969, George’s reputation as a songwriter caught the attention of Rick Hall at Fame Records in Muscle Shoals, Alabama, and he was signed as a Fame songwriter. George’s first of many Gold Records as a songwriter, “One Bad Apple” by The Osmonds, came soon after his arrival at Fame.

After five years with Fame, George moved across town to another Muscle Shoals music mecca, Muscle Shoals Sound, where he continued to turn out great hit songs at a phenomenal pace. One of George’s MSS demo recordings actually became his biggest hit ever: Bob Seger’s 1979 rock classic, “Old Time Rock & Roll”. Another of George’s MSS songs “Down Home Blues” by Z. Z. Hill, released by Malaco Records in 1982, became the best known blues song of the 80’s and Malaco’s biggest hit. “Unlock Your Mind” recorded by the Staple Singers and “The Only Way Is Up” recorded by Otis Clay and Yazz & The Plastic Population were two of George’s other MSS songs to reach the top of the music charts.

George Jackson’s legion of fans worldwide mourn his passing and treasure his uplifting spirit and the immeasurable joys so many find in the words of his songs. One of George’s timeless gospel songs says best what his last wish might be…. ”Lord, Remember Me”.

Services will be held Saturday, April 20. Visitation will be at 10:00 AM and the service will follow at 11:00 AM, at Westhaven Memorial Funeral Home, 3580 Robinson Road, with burial at Garden Memorial Cemetery, 8001 Highway 49N, Jackson, MS.