Miami’s own first inspirational/gospel soul band, SENSERE, is gearing up for a big year with the release of a soulful, new, love ballad, “Baby” featuring Paula Champion, which is available now on all purchasing and streaming retailers (http://smarturl.it/SensereBaby).

“Baby” was produced and written by Sensere’s founder and leader, James Wright, along with band members Dwayne Charlton, Brian Williams, and Ed Rawls.

“Baby” is the first R&B ballad the band has ever recorded. They felt it was important to include this song on the new album to say thank you to the special women in their lives who have stuck by their sides through this crazy, 10-year, musical journey. “Baby” also features R&B/Jazz/Gospel vocalist, Paula Champion, one of the most breathtaking, in-demand voices, that has come along in the past several years. 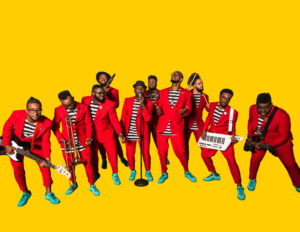 “I knew I wanted to put a love song on this album, but I wanted it to be special, not just the guys. I’ve always been a huge fan of Paula Champion, but I honestly did not know if she would say yes. But when she heard the song, she loved it and the rest is history! I love the final outcome, so I hope everyone else does as well,” says James Wright.

“Baby” is the follow up single to their masterfully, crafted Commissioned remake “Tis So Sweet,” that won Sensere rave reviews for the tasteful, yet dynamic rendition. Several of the original members of Commissioned tipped their hats to the 10 member band, giving them their stamps of approval. “Tis So Sweet” and their newest offering “Baby” are taken from Sensere’s forthcoming third project, which will drop later this year.

On Sensere’s upcoming release, the band is pulling out all the stops covering a range of styles and sounds on this new project from 80’s R&B and Quartet, to Funk and Soul. This album is intended to bring a fun, energetic, feel back to gospel music, but keep the message of love and God in the forefront.

In addition to Paula Champion, the album will include 4 additional features making the musicality on this third release a real showstopper.