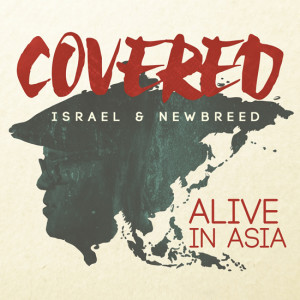 COVERED: ALIVE IN ASIA offers outstanding guest artists including Yolanda Adams on “How Awesome Is Our God,” Jonathan McReynolds on “Already Done,” and Tye Tribbett joining on “Chasing Me Down.”

From Africa to Europe and now Asia, Israel & NewBreed continue to expand the reach of their music ministry bringing Gospel music worldwide. “We are pleased as a team that this COVERED: ALIVE IN ASIA offering has been received so well in its first week,” said Houghton. “A lot of labor and a lot of love has gone into this project. We thank God for the opportunity to reach people worldwide. Grateful for this honor.”

Featuring production from Aaron Lindsey, Covered: Alive in Asia will mark Israel Houghton & NewBreed’s 10th album together and 15th year anniversary as a group. The project features a 16 track digital deluxe version and limited edition CD/DVD combo pack that includes 13 tracks plus a documentary offering an intimate behind-the-scenes look at the recording process and footage of some of the most beautiful and exotic cities in Asia.