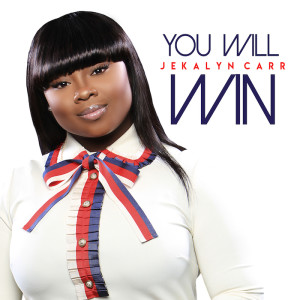 Gospel music’s reigning princess, Jekalyn Carr, has just announced the first single to be released from her forthcoming live record, One Nation Under God.

The song, “You Will Win” is a powerful and prophetic word from the Lord to encourage all believers. The song was a standout at Carr’s recent live recording and is a bold declaration of victory in Christ Jesus.

“You Will Win” was written by Carr’s father, Allen Carr, the songwriter behind her biggest records to date, including “Greater Is Coming” and the Grammy nominated “You’re Bigger.” This father-and-daughter dynamic duo has proven to be anointed and impactful within the body of Christ, as they labor together to ensure that God’s name is uplifted and His people are blessed and encouraged.

Carr feels lead to declare a winning season over the saints of God. “Many have toiled and suffered tribulation in their bodies, in their finances, and in their homes and families, but God wants us to know that it is time to reap the fruit of our tears, our prayers, and our worship,” she states. The song, which will soon be released to radio outlets across the country, is destined to become an anthem of faith around the world. Its refrain, “It’s my winning season. Everything attached to me wins!” is sure to resonate within the hearts and souls of all who hear it.

The Bible declares that death and life are in the power of the tongue, and Carr firmly believes that releasing this collective proclamation of faith into the atmosphere will command a mighty move of God on the behalf of all His people.

“You Will Win” can be considered the soundtrack to Carr’s soon-to-be-released and similarly titled book as both declare the season of victory that she believes God has prepared for His own. You Will Win: Inspirational Strategies to Help You Overcome is a collection of Carr’s most poignant and powerful exhortations, inspirational messages, pointers, and strategies designed to promote a victorious life in Christ. While out traveling the world, and ministering to the masses, Carr has sensed a strong yearning for the tools necessary to live victoriously, in Christ. To that end, she felt compelled to create these audio and printed resources that will provide Biblical and relevant insight for believers.

Taking their message of faith to an even bigger audience, Carr and Carr will soon be contributing to the wildly popular original OWN series, “Greenleaf”. Jekalyn will appear in a guest-starring role in the upcoming season and will be featured on the official show’s soundtrack, with a song produced by Mr. Carr.

Carr’s new song, the book, and the album will all be released soon. Her appearance on “Greenleaf,” and her contribution to the soundtrack, are both slated for this Fall. Each of the above will set the stage for another dynamic season of ministry and evangelism for the Carr family.