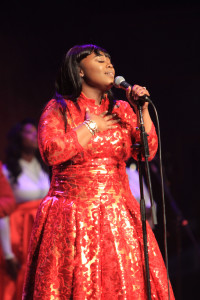 Carr stood boldly and confidently as she shared the songs that God has birthed in her, through her, and for her to share with the world. Those in attendance are already proclaiming that this will be her most successful and impactful release yet, after witnessing, first hand, the power of God that became manifest in the church.

Gospel television royalty and recording artist Dr. Bobby Jones summed it up by saying that Carr is “…an amazing gift!” Jones went on to say that hers was one of the best live recordings that he has attended in quite a while. Also in attendance were other industry elite such as Phil Thornton, Sr. Vice President and General Manager of Verity Records-RCA Inspirational, Gina Miller, Vice President and General Manager of eOne Entertainment, Jackie Patillo, President and Executive Director of the Gospel Music Association, and Eboni Funderburk, President of EFG Promotions. Each of these industry professionals, along with supporters from all around, stood in amazement as they witnessed God move so mightily and effectively through Carr.

There were also a large contingency of radio announcers, also referred to as Gospel’s gate keepers, present for this once in a lifetime live event. Most have watched Carr grow up right before their very eyes – and on their airwaves – since her earliest recordings. They are no strangers to the anointing that she carries, yet were still blown away at the tremendous growth, poise, and maturity that she displayed.

One Nation Under God is poised to become another mighty movement of God for His people. As Carr is maturing and walking into womanhood, she is growing into an even greater anointing and boldness that is needed for such a time as this. She hasn’t just written and recorded songs to sing. She has answered the call from the Lord to unify the body of Christ all around the world, and has surrendered her sound and her ministry to be the soundtrack and vessel that He uses to do it.

One Nation Under God will be available later this year on Lunjeal Music Group.