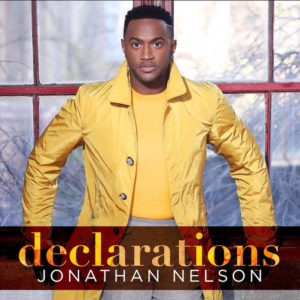 This 12-track brand-new album with Nelson’s signature vocals, lyrics and sound, “DECLARATIONS” affirms Nelson’s place in gospel music as a trailblazing praise and worship leader. From beginning to end, “DECLARATIONS” is authentic worship, straight from his heart.

Produced by Jonathan Nelson and Kenneth Shelton (KenHe Music Productions), “DECLARATIONS,” was recorded in both Baltimore, MD and Sunrise, FL. Nelson says the objective of this album is to give believers affirmations they can declare to God, and also hear God’s response to their call. The result is a blend of traditional and contemporary stylings that Nelson is known for. Songs like “I Agree” and “Redeemed” are sure to resonate with those who have followed Jonathan’s writing and music. Songs like “Jesus You Are Lord,” featuring Anaysha Figueroa Cooper, and “Because You Are,” featuring BeBe Winans, will cause listeners to reflect on their love of God. The album also featured collaborations with Gene Hoskins, Jalisa Faye and Na’Asia Barnes.

Nelson says, “At any given point of a Sunday morning church service, you can sing one of these songs.” Nelson is confident that “Declarations” will inspire listeners to “start declaring and speaking over their lives.”

Nelson is the son of a Pentecostal preacher and an alumnus of the Baltimore School for the Arts and Morgan State University. He served as the worship leader at Empowerment Temple A.M.E. Church in Baltimore, MD, under the leadership of Reverend Dr. Jamal-Harrison Bryant, in the early 2000s.

Nelson’s loyal fans continue to join him in sharing what they are believing God for by using the hashtag #Declarations2018. In support of “DECLARATIONS,” the singer/songwriter, worship leader and producer will conduct a series of release concerts in Philadelphia, Chicago, Atlanta, New York, with west coast and international dates later this fall. For more information on Jonathan Nelson visit JonathanNelson.us.