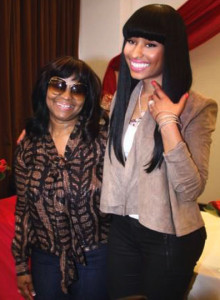 Carol Maraj is looking to launch a gospel career, and has posted a 30-second preview of her single “God’s Been Good” on SoundCloud Monday to start her quest. Here’s one of her songs below.

Tell us what you think?

PATH’s been reporting for two years that Carol planned to record an album, and now it seems a release date is in sight.  In 2011, Nicki Minaj decided to help her mom’s quest of becoming a Gospel singer when during her second acceptance speech at the American Music Awards, she revealed that her mother was going to be releasing a Gospel album. Nicki Minaj won the AMA award for Best Rap/Hip-Hop Album, and mentioned that her mother had already found a publicist.