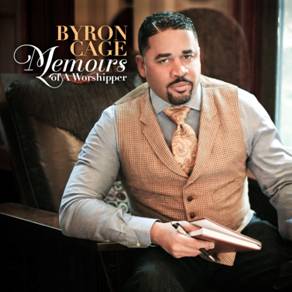 Byron Cage is known as an innovator in the genre known as praise and worship. Taking the excitement of the live church experience and melding it with contemporary and stirring melodies, Cage has presented songs heard in choir stands week after week.

With the release of his ninth CD, Memoirs of A Worshipper, fans have been lifting their hands to the spirited, Top 10 Billboard hit, “Great and Mighty”. Now Gospel music lovers can “get their praise on” with the brand new single, “Troubles Away”. The retro cut has believers “dancing their troubles away”.

The upbeat, throwback track is a feel-good, perfect-for-summer jam. Cage says about the new single, “As Christians, we don’t have to worry. 1 Peter 5:7 says that we can cast our cares upon the Lord because He cares for us. So we can wave them off; we can wave our troubles away.” He will be performing the song on the upcoming season of Bobby Jones Gospel which is taping at BET Studios in Washington, DC on Saturday, July 27th. Also, he will be co-hosting a show with the legendary Dr. Bobby Jones.

In addition to his role as a radio personality on Radio One’s Praise 104.1FM in DC and host of Joy In The Afternoon on Sundays, Cage holds two minister of music positions – at Ebenezer AME Church in Fort Washington, MD and at St. Paul’s Baptist Church in Richmond, VA. Although primarily known as a worship leader, Cage is also a minister of the Gospel and has been stepping up to the pulpit frequently lately.

Licensed in 1992 and ordained in 1997, he’s been preaching at a number of events including the recent I Hear Music In The Air Conference last May, leaving many in attendance in awe. He’s slated to preach at the Kappa Alpha Psi Fraternity, Inc. National Convention on Saturday, August 10th in Houston, TX and again at the Midwest Black Family Reunion during their 25th Anniversary Celebration from August 15-19, 2013 in Cincinnati, OH.

Born in Grand Rapids, MI, Byron Cage was raised by two preaching parents. His mother is a preaching evangelist and as a youth, he would travel with her and play for her. With both parents in ministry, some may believe it was hard for the bug not to bite him as well. But Cage insists that it was more than genetics that had him step up to the sacred desk for the first time. He says, “I definitely think that my parents being preachers had a strong influence on me, but I knew that God called me to preach as well.”

After moving to Atlanta to attend Morehouse College, he finally accepted the call to ministry. Like many, he ran from the call initially, understanding the seriousness of the commitment. “There’s another level of discipline that comes with accepting that call,” he shares. “It’s not to be taken lightly”.