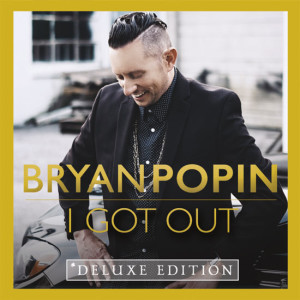 Rising Gospel star Bryan Popin has big news to celebrate. His Little Boy Wonder Music/Flaydo Music album and sophomore release I Got Out enters at No. 1 on both the Billboard Current Gospel Albums and Top Christian/Gospel Albums sales charts this week and is the fourth highest Gospel debut of 2017. I Got Out, released July 21, is available in stores and on all digital outlets including iTunes, GooglePlay and Amazon Music.

The Nashville-based singer/songwriter may seem like an unlikely candidate for the Billboard top honor, but this is not the first time an emerging artist has landed at No. 1. And, when an emerging artist does break through it gets the industry talking. Released independently through Fuel Music, I Got Out was boosted by strong Gospel radio support and substantial touring, including last weekend’s Praise In The Park event in Atlanta, GA, where Popin played to a capacity crowd and received rave reviews.

The album debuts with more than six times the sales of his freshman project, a major label release. For the songwriter and artist whose new album moves into uncharted territory on an independent-minded music course, Popin’s I Got Out provides proof that fans will readily follow him on this journey. Popin now continues his tour, which expands with more concert dates, to share the Billboard No. 1 album with supporters.

“I’ve worked hard and pushed more than I ever have before to deliver a project that represents my faith,” says Popin. “I started my own label to walk in my purpose and make a way for my music and the messages of encouragement and hope I want to share. I co-produced the album, put together a label team, drove hours to shows and was even my own tour manager, all because of this calling. I don’t take this success lightly. I celebrate it with my family, label team, Gospel radio, the fans, and everyone that has believed in me and supported this ministry. I thank God for such incredible favor and blessings.”

Experienced industry executive and label team leader, Larry Blackwell comments, “It is a privilege to work with Popin on his new project, and I’m thrilled to be a part of this groundbreaking story.”

I Got Out is packed with personal, testimony-driven songs and includes the title cut and lead radio single, currently No. 8 on Billboard’s Gospel radio chart. The project is produced by Popin and super-producer AyRon Lewis (Kirk Franklin, James Fortune, Bishop Paul Morton Jr.). “Step In The Name” is loaded with infectious grooves and assertive lyrics to “just let go” and “step into your miracle.” Top-notch collaborations include BET Sunday Best winner Tasha Page-Lockhart joining Popin on “Beautiful Savior,” an audacious cut with a sound that goes beyond the genre, and Gospel music and television superstar Tamela Mann contributing a soulful version of “Alright.”

What the industry is saying…

“Bryan Popin brings that fire that is sorely needed to the format! He’s got a lot of folks talking!” – Derek Harper, Program Director, 102.5 Praise FM, Radio One Atlanta

“It was a pleasure working with Bryan on this record. This project is funky and churchy all at the same time. I’m just grateful to be a part of it.” – Tasha Page-Lockhart, RCA Inspirations Artist and BET Sunday Best Winner

“I Got Out by Bryan Popin is one of our most requested songs, I love the energy! And, it’s a song the church choirs can add to their selection. I’m really happy for Bryan!” – Jerry Smith, Program Director, 103.9 The Light FM, Radio One Raleigh-Durham