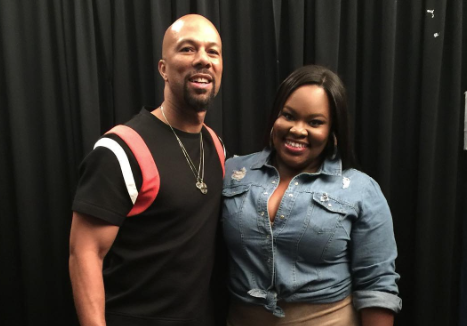 [Common & Tasha Cobbs are cooking things up in the studio]

It hasn’t been revealed, but it looks like the multi-Stellar Award winning artist Tasha Cobbs is working on something with actor/rapper Common!

In the video (below) you can hear Common telling instagram followers that he and Tasha Cobbs are “cooking up some stuff” in the studio. Tasha Cobbs congratulates Common on his new movie role in Barbershop 3, which just hit theaters over the weekend.

Common came to fame as a secular hip hop artist that favors story-telling over club music. He’s since branched out to acting, where he’s landed a number of big roles throughout the past decade.

So is Cobbs and Common working on a new Gospel song? Maybe the song is for a movie? Only time will tell, but we’l keep you updated!

Working with my bro @common!!! He’s such a genius and example for our generation!!! Soooooo proud of the amazing work he did in the #BarberShop3… you gotta go check it out!!! ❤️