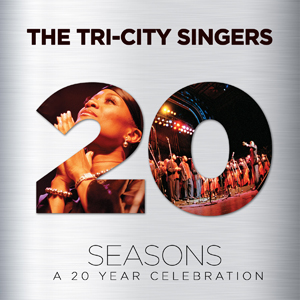 Donald Lawrence took on The Tri-City Singers after a friend vacated his position as musical director. (NOTE: The three cities that The Tri-City Singers come from are Spartanburg, SC, Gastonia, NC, and Charlotte, NC) The group debuted in 1993 with A Songwriter’s Point Of View on a then-brand-new independent record label called GospoCentric Records.

The set debuted at #2 on the Billboard Top Gospel Charts. The group’s follow-up release Bible Stories would top those same charts when it arrived in 1995. It was the first to be billed as Donald Lawrence & The Tri-City Singers and featured black church-ubiquitous hits such as “A Message For The Saints”, “I Am God” and “Stranger”. The album was released on Lawrence’s newly minted label Crystal Rose Records which was distributed through Sparrow Records.

In 2000, Donald Lawrence & The Tri-City Singers signed to EMI Gospel. To promote the new album, a maxi CD of the lead single “Testify” to the mainstream. House remixes by Junior Vasquez sent the song to #33 on Billboard’s Mainstream Dance Charts. When tri-city4.com was finally released in late summer 2000, the set peaked at #2 on Billboard’s Top Gospel Charts and #13 on Billboard’s Heat seekers Chart. The album also got a profile boost from the all-star standout “God’s Favor”, featuring vocal turns from Karen Clark Sheard, Kim Burrell, and Kelly Price.

Lawrence waited almost two years before delivering the follow-up Go Get Your Life Back in early 2002. “The Best is Yet to Come”, a song sonically much in the vein of the previous smash “Testify,” was chosen as the album’s lead single. This release featured guest appearances from Ann Nesby (formerly of Sounds of Blackness) and gospel pioneer Bishop Walter Hawkins. The momentum continued with the 2003 release of Restoring The Years, a greatest hits album featuring two new songs.

In March 2006, The Tri-City Singers announced that they would retire, but not before one last live recording. Finale: Act One and Finale: Act Two were released simultaneously on April 4, 2006. Each release was a CD/DVD set that chronicled the audio and video of one half of the concert, with packages that locked into one another respectively. A special edition of Finale was later released with both CDs and DVDs. The blowout concert included guest appearances from Bishop Walter Hawkins, Karen Clark Sheard, Vanessa Bell Armstrong, Daryl Coley, LaShun Pace, Darwin Hobbs, and many other gospel luminaries. The album’s lead single “The Blessing Of Abraham” was nominated for a Grammy Award for Best Gospel Performance in December 2006.