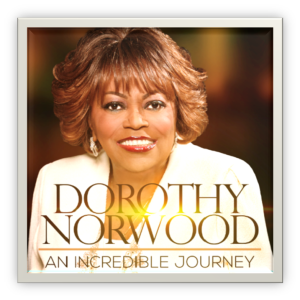 What an incredible journey for the World’s Greatest Gospel Storyteller, Evangelist Dorothy Norwood has she has been nominated for “Traditional Female Artist of the Year” for the 2016 31st Annual Stellar Awards.

With over 52 years in the gospel music industry Norwood’s latest album set record breaking numbers, debuting on the Gospel Music Charts at number two (2). She was cited by Billboard Magazine as “Dorothy Norwood Tops Herself” with her new project “An Incredible Journey” on her own label “Dorothy Norwood Music Group” distributed through EchoPark/ JDI.

Norwood has received many awards and accolades over the years and is noted as one of the “Greatest Living Legends and Trailblazers” to date. Norwood was the only gospel artist to tour with the Rolling Stones in 1972 and has share the stage with many musical greats. She is humbled and so honored for the acknowledgement from the Stellar Awards for recognizing her body of work, as she has paved the way for so many artists. She has received 10 Stellar Award nominations and she won 4 Stellar Awards, 9 Grammy nominations and winner of the 2005 Soul Train Music Awards, just to name a few. Norwood puts God first in her life and she gives God ALL the Glory for the things He has done on her behalf.