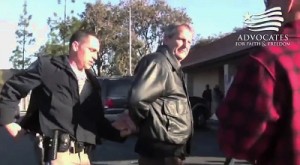 The criminal trial for two men who were arrested for reading the Bible aloud outside of a California Department of Motor Vehicles (DMV) office began on Monday.

The incident occurred in February 2011 when Pastor Brett Coronado, Mark Mackey and Edward Florez, Jr. went to the DMV in Hemet early one morning to evangelize those who were waiting for the facility to open. As they stood in the publicly-owned parking lot, approximately 40 feet from the entrance, Mackey began to read out loud from the Bible.

However, soon after, he was approached by a security officer at the DMV, who asked him to move elsewhere. The men then asserted that they had a First Amendment right to engage in their activities, and Mackey continued to read from the Scriptures.

Approximately 10 minutes later, California patrol officer Darrin Meyer arrived on the scene, grabbed Mackey’s Bible, and put him in handcuffs. He informed the men that they could not “preach to a captive audience.”

“This is what the United States is coming to,” Mackey began to call out, holding his hands behind his back.

“You can preach on your own property,” Meyer said.

“What law was he breaking?” Coronado and Florez asked.

When the men continued to inquire from a second officer as to why Mackey’s activities were considered unlawful, he put them both in handcuffs, citing them for “impeding an open business.”

“Any person who intentionally interferes with any lawful business carried on by the employees of a public agency open to the public, by obstructing or intimidating those attempting to carry on business, or those persons there to transact business with the public agency . . . is guilty of a misdemeanor, punishable by imprisonment in a county jail for up to 90 days, or by a fine of up to four hundred dollars ($400), or by both that imprisonment and fine,” the law states.

“He’s creating an intimidating situation for people who simply want to get their driver’s licenses renewed,” attorney Dan Conaway told reporters. “He does not have the right to intimidate others and force them to listen, and impede their ability to do normal daily business activities, such as go to the DMV.”

But Advocates for Faith and Freedom, the Christian legal organization that is representing the men, states that the DMV was closed at the time of arrest and that California law does not prohibit speaking to a “captive audience.” Attorney Robert Tyler contends that the Christians were simply engaging in the free exercise of religion.

“These men were exercising their First Amendment right of free speech,” he outlined. “They were simply sharing their faith on public property, and we will defend their constitutional right to do so.”

The organization soon filed a federal lawsuit against California Highway Patrol, and Riverside County District Attorney Paul Zellerbach responded by charging two of the men, Mackey and Coronado, with trespassing for failing to obtain a permit to conduct a “demonstration or gathering in or upon any state buildings or grounds.”

“This prosecution amounts to nothing more than retaliation for our filing a federal lawsuit,” Tyler stated.

He asserts that the trespassing statute is inapplicable as the men were not demonstrating and were not holding a gathering.

The official trial for the Christians began on Monday and is expected to continue throughout the week.