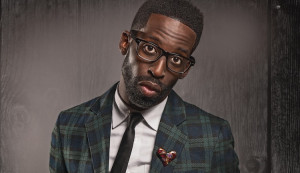 Grammy Award winner Tye Tribbett was already scheduled to give a “Hate Won’t Win” concert in Columbia, SC this coming Thursday when he saw a shocking site on the evening news. He witnessed almost 50 Ku Klux Klan members angrily chanting and waving confederate flags to protest the removal of the Confederate flag from the South Carolina Statehouse in Columbia last week.

“I’m even more committed to fighting racism than ever before,” says the gospel superstar whose dynamic ensemble has shared stages or recorded with the likes of Faith Hill, Justin Timberlake, Sting and Don Henley.

“It’s a sensitive place to be right now in Columbia where one side wants to honor the efforts of their forefathers and another side wants to erase the memories of the pain caused by them,” Tribbett says thoughtfully sighs.” It’s not going to be an easy road, but I do know this: hate won’t win!”

Tribbett’s July 23rd “Hate Won’t Win” concert will raise money for The Mother Emanuel Hope Fund and The Lowcountry Ministries –Reverend Pinckney Fund which will benefit the families and church of the nine people who were killed during a racially-charged mass shooting at a prayer meeting at the historic Emanuel A.M.E. Church in Columbia June 17th. The concert features some of the biggest names in gospel music such as gold-selling recording artist Israel Houghton, “Break Every Chain” singer Tasha Cobbs, R&B star Akon’s protégé Mali Music and Top Ten recording artist Travis Greene.

Tye Tribbett leaped on to the national scene in 2004 with his riveting Top Ten radio smashes “No Way” and “Everything.” His frenetic energy and showmanship catapulted him to the top of the gospel field with subsequent radio hits such as “Victory,” “No Other Choice” and “If He Did It Before… Same God.” Four of his five albums have peaked at #1 on Billboard Magazine’s Top Gospel Albums sales chart and his latest “Greater Than” won the artist two Grammy Awards including Gospel Album of the Year.