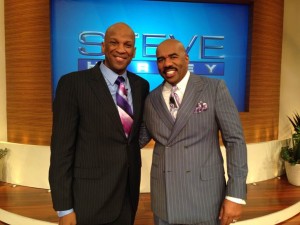 After talk show host and comedian Steve Harvey made a public plea for people to go out and get Donnie McClurkin’s new CD ‘Duets’ it briefly shot up to #1 on iTunes. During a recent episode of The Steve Harvey show McClurkin interviewed and performed his song ‘All About the Love.’

Steve Harvey, a Christian, recounted a story about how McClurkin helped to change his life! “Donnie McClurkin is like my brother. He changed my life one day,” says Harvey.

McClurkin had invited Harvey to appear on a television show, and Harvey assumed that he was going to give a comedic performance. Harvey was surprised to find out that McClurkin was expecting a completely different kind of appearance from him. “Instead of asking me to be funny, somebody asked me about my soul – and I had never spoken out loud about my soul, about my struggles,” Harvey recounts. “You changed my life, man,” Harvey adds.

Take a listen to McClurkin’s performance below: