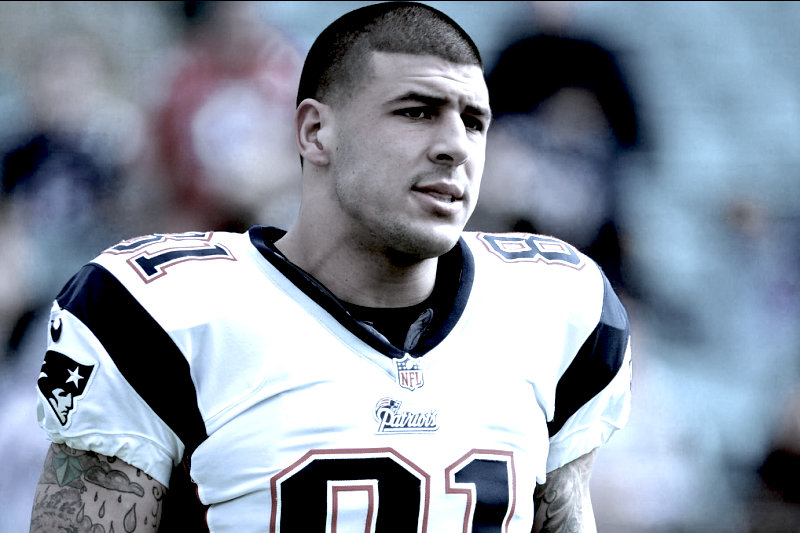 Let the conspiracy theories begin… As you may know former NFL all-pro New England Patriot Aaron Hernandez was found dead in his single cell from an apparent suicide yesterday morning around 3am.

Hernandez tried to block the cell door from the inside by jamming the door with various items, Department of Correction spokesman Christopher Fallon said in a statement.

Law enforcement told the media that Hernandez was found with “John 3:16” written across his forehead. That Bible verse reads, “For God so loved the world that he gave his only begotten son, that whosoever believeth in him should not perish, but have everlasting life.”

Hernandez also wrote the scripture on the wall and had a bible open to the same passage. A suicide note has not been found or reported by authorities at press time.  UPDATE: Some media sources are now reporting that the police found 3 handwritten letters.  One written to his long-time girlfriend Shayanna Jenkins-Hernandez, one to his 4 year old daughter, and one to his gay lover he met in prison.  That man is reportedly on round the clock suicide watch.

Hernandez was found guilty of killing former semi-pro football player Odin Lloyd. Then just last week he was acquitted of the slayings of de Abreu and Furtado, whom prosecutors contended were gunned down after one of the men accidentally spilled a drink on Hernandez in a Boston nightclub. The jury in that case found Hernandez not guilty of first-degree murder but convicted him of unlawful possession of a gun, and the judge sentenced him to an additional four to five years in prison — separate from his existing life sentence.

That acquittal is what the Hernandez family is using as ammo to go after money and property owned by Hernandez. The family argues that Hernandez was in a great state of mind, and wouldn’t have killed himself. Essentially blaming inmates or officers for his death.

A lawyer who represents Lloyd’s mother says she’s moving forward with a wrongful-death lawsuit against Hernandez’s estate. He says he has placed liens on Hernandez’s Massachusetts home, estimated to be worth $1.3 million.

Hernandez’s lawyer Jose Baez said in a statement, “The family and legal team is shocked and surprised at the news of Aaron’s death.” “There were no conversations or correspondence from Aaron to his family or legal team that would have indicated anything like this was possible. Aaron was looking forward to an opportunity for a second chance to prove his innocence. Those who love and care about him are heartbroken and determined to find the truth surrounding his untimely death. We request that authorities conduct a transparent and thorough investigation.

“The Baez Law Firm will participate in its own examination into this tragic event and update the media and public on its findings when they become available.”

Hernandez’s former sports agent, Brian Murphy, said Wednesday morning there was “absolutely no chance” Hernandez took his own life. “Chico was not a saint, but my family and I loved him, and he would never take his own life,” Murphy said.

That sentiment was shared by Hernandez’s cousin, Randy Garcia.

“Most of us are in shock. We still don’t believe that this happened,” Garcia told WTNH via Skype. “We still think there’s no way Aaron would take his own life.”

The thought of Hernandez taking his own life seems highly plausible to people following the case for years, but the people who know him best are calling foul.

A thorough investigation will probably take into account samples of Hernandez’s hand writing, and the manner in which Hernandez was able to write the biblical scripture on his own forehead. Signs of struggle and more should be carefully looked at. So it’s hard for me to say whether or not a conspiracy theory has credence.

If Hernandez did write the biblical quote, he’s definitely telling the world that God is his only judge. Let’s just hope Hernandez truly knew the Lord.

Hernandez grew up in Connecticut and played for the Patriots from 2010 to 2012.

During his second year with New England, he caught 79 passes for 910 yards and seven touchdowns and helped the team reach the Super Bowl. In 2012, he signed a five-year, $40 million contract extension.  The team released him in June 2013, shortly after he was arrested in Lloyd’s killing.