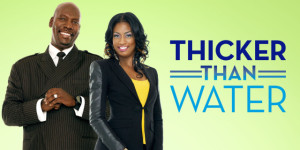 Season one’s rating success proved family values are great T.V. and now “Thicker Than Water” is set to return for a second season on Sunday, January 4 at 9 pm ET/PT.

The unpredictable Tankard clan continues to live their lives as best as they can with their strong religious convictions at hand. Ben and Jewel Tankard are back, leading their self-proclaimed with children Brooklyn, Britney, Benji, and Cyrene. Joining the family in the “Tankard Palace” is Ben’s oldest son, Marcus, who returns to Tennessee with his wife, Trish, to a warm welcome from everyone – except Britney.

Preacher and patriarch Ben celebrates a year of milestones this season as he turns 50 and his 25th anniversary in music is fast approaching. At the same time, he deals with the twists and turns that come with fatherhood. The real ruler of the household, Jewel, faces what the kids are calling a midlife crisis as she copes with her golden girl and youngest, Cyrene, leaving for college and a rift with her sister that threatens to divide the family. The eldest daughter of the Tankard clan, Brooklyn, finally comes into her own as an entrepreneur, channeling big ideas into money-making opportunities and taking the hair industry by storm. Healthier than ever, Britney embarks on a transformative fitness journey, and when the return of Marcus opens up old wounds, she stands ready to confront her traumatic past. Recently married Benji is motivated to follow in his father’s financially successful footsteps while itching to start a family of his own. An old soul and born leader, Marcus is more concerned with making a difference than with making millions, and when his family discovers the secret he brought home with him, it changes the Tankards forever.

For a sneak peek at the series see below: