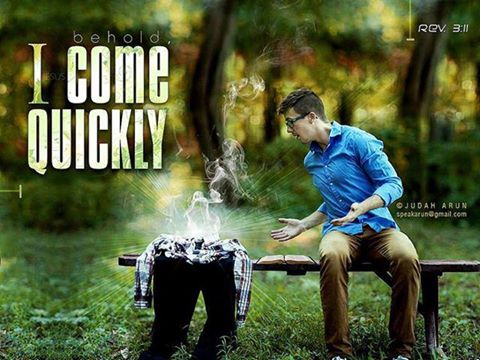 A seven-minute video dubbed, “Rapture 9-1-1 . . . R U Still Here?” has made its online debut aimed at evangelizing tribulational unbelievers. In order to appreciate its effectiveness, present-day viewers must have the mindset of someone who has missed the Rapture of the Church, therefore left behind to endure the terrors of the tribulation as described in Revelation. According to the video’s script writer, Mignette Patrick Dorsey, the short video will offer hope to terrified viewers of the future.

“We’ve all heard about the introduction of the Anti-Christ and his signature 666-mark,” Dorsey said. “But rarely have we thought through how we as Christians today might leave information behind to help those stuck on earth for the seven-year tribulation.”

We also do not consider that wherever Christians are physically located at the moment Jesus Christ fulfills I Thessalonians 4:16-17, their personal effects will be left behind, she said. “So what will unbelievers find when they ransack our cars, offices and homes?” Dorsey asks. “Hopefully, we will have downloaded the video to a DVD so they can get a fast explanation of how to survive the horrors, and get saved in the process.”

Dr. Larry Patrick, pastor of Charis Chapel Bible Church, the executive producer, admits the production is relevant to those who believe the Rapture of the Church will occur prior to the start of the tribulation, or, the Hour of Judgment, as the Bible also calls it.

“It is understood that the Lord will have evangelists on earth during the tribulation, but since we have the technology at our fingertips, why not put it to good use?” Patrick asks. “And it is also important for the production to be free and available to whomever has the foresight to think about those who will be alive at the start of the Tribulation. People will be looking for answers, and we must think beyond the comforts of the present hour and consider people who literally will be frightened to death when millions go missing throughout the world.”

Christopher Houck of “Mellowdesigner” filmed and edited the video, while Deloris Madison Productions provided the actors featured, actors who delivered more subdued performances as they were instructed to imagine how petrified future audiences might feel.

Viewers are encouraged to post the movie below and/or download the video to DVDs and leave them . . . wherever future unbelievers are (expected to be) found.

ABOUT MIGNETTE PATRICK-DORSEY: Dorsey is the author of the history book Speak Truth to Power: The Story of Charles Patrick, a Civil Rights Pioneer (University of Alabama Press, 2010). She is a widely-published former newspaper journalist who has also written screenplays. She currently teaches English at a community college in Texas. Website: www.mignettepatrickdorsey.com

ABOUT PASTOR LARRY PATRICK:  Pastor Larry B. Patrick received his Th.D. from Tulsa Institute of Biblical Languages in 1992. He continues to serve as President and Professor of Theology at the Charis Seminary, which he founded in 1986.  Website: www.ctsbi.org