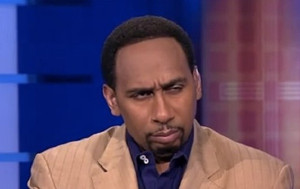 For those of you that know Mega-star sports analyst Stephen A. Smith of ESPN, you know he is known for telling it like it is un-apologetic.

What you may not have known is that he is a Christian, and believes in Jesus Christ as his savior. The video below shows Stephen A. Smith speaking at Salem Baptist Church of Jenkintown, PA.

Smith feels that George Zimmerman could not have been convicted with the evidence presented, and with the incompetence of the witnesses brought forth by the prosecution. He does feel that Zimmerman was wrong, but should not have been charged with second degree murder. Manslaughter was more appropriate according to the law.  He also issues a challenge to the black community.

Take a listen to what he had to say by clicking the video picture link below.