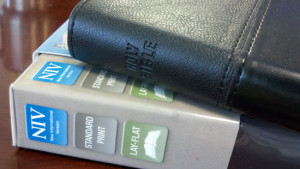 The New International Version remains the bestselling Bible translation, outranking the King James Version and the New Living Translation in both dollar and unit sales, according to the latest best seller’s report from the Association for Christian Retail. Meanwhile, NIV publisher Zondervan reports that more than 11 million digital and print copies of the Bible translation have been sold worldwide.

The best seller’s April 2013 list from the Association for Christian Retail, commonly referred to as the CBA, ranks the NIV, KJV and the NLT as the three leaders, respectively, among the 10 ranked predominantly English Bible translations. Only one non-English translation appears on the list – the American Bible Society’s Reina Valera 1960, a popular Spanish Bible.

Standout among the list, however, is the NIV, which has more than 450 million copies in print. The NIV, reportedly the first major translation to depart from the traditional KJV, debuted almost 35 years ago and has become the most read modern English Bible translation, according to Zondervan, one of the leading Christian publishers.

Tara Powers, spokesperson for Zondervan, told The Christian Post Tuesday that she believes the NIV has been so popular among readers due to is readability and because it stays true to the meaning of the original Hebrew, Greek and Aramaic texts.

Chip Brown, senior vice president and publisher of Bibles for Zondervan, added in a statement, “We are elated that the NIV remains the translation of choice for millions of people around the world who want to read and understand God’s unchanging Word in today’s language.

“Since its debut in 1978, the NIV has become and remains the world’s bestselling Bible by God’s grace, and because the NIV translation philosophy uniquely translates directly from the original Bible languages into the way English is spoken today.”

Also noteworthy for Zondervan, which is home to popular ministers like Andy Stanley, Rick Warren and Christine Caine, are the sales of more than one million copies of “The Story,” a recently released chronological narrative account of the Bible. Additionally, the updated NIV Study Bible has sold more than nine million copies since its original release.

The updated NIV, released in October 2011, was named as one of five 2013 Christian Book Award finalists among Bibles (following two NLT formats, an ESV and one KJV version). The update, however, was rejected by some Christian communities who felt the new NIV translation, previously the TNIV, was compromised by the Committee for Bible Translation’s decision to use gender neutral distinctions. In particular, the Southern Baptist Convention and the Lutheran Church-Missouri Synod cautioned against the NIV’s use of gender-inclusive pronouns.

The LCMS Commission on Theology and Church Relations claimed the “inclusive language in [the] NIV 2011 creates the potential for minimizing the particularity of biblical revelation and, more seriously, at times undermines the saving revelation of Christ as the promised Savior of humankind.”

The CBT has insisted, however, that “all gender decisions for the updated NIV were subjected to rigorous scrutiny” with care “to ensure that the words chosen maximize comprehension of the original meaning.”

Despite the resistance to the latest NIV, the Bible translation remains a favorite among many readers, particularly those in the U.S., where the greatest number of units are sold compared to the other 36 countries where Zondervan distributes the translation.

Powers, Zondervan’s spokesperson, told The Christian Post that feedback has been “very, very positive” despite the early controversy.

“There are a lot of great translations out there and the NIV is not for everybody,” she added, noting that it is a good thing that English readers are free to choose whichever translation they find suitable.

Zondervan is listed along with Thomas Nelson under HarperCollins Christian Publishing and is a leading publisher of Bibles, books and other products. The Grand Rapids, Mich.-based company’s products are sold in more than 60 countries and translated into nearly 200 languages.