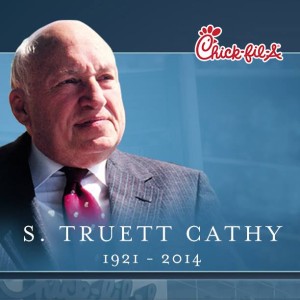 S. Truett Cathy, the founder of the Chick-fil-A fast-food chain known for its chicken sandwiches as well as for its president’s Christian morals died on Monday at age 93.

Cathy, the billionaire chairman emeritus of the privately held Atlanta-based company known for requiring the chain’s restaurants to close on Sundays in keeping with its Christian principles, died peacefully at his home in Clayton County, Georgia, a company spokeswoman said.

Cathy opened the first Chick-fil-A in 1967 in his native Georgia, where he is credited with creating the recipe for the company’s signature boneless chicken sandwich and helping to pioneer the idea of putting restaurants in shopping malls.

A devout Southern Baptist, he earned both admiration and disdain for his unapologetic mix of religion and business as he built a family-owned empire that now includes more than 1,800 locations in 40 states.

Chick-fil-A netted $5 billion in sales in 2013, according to the company.

“People appreciate you being consistent with your faith,” he once told the Atlanta Journal-Constitution. “It’s a silent witness to the Lord when people go into shopping malls, and everyone is bustling, and you see that Chick-fil-A is closed.”

The chain made headlines in 2012 when president Dan Cathy – the founder’s son – told an online religious newspaper that he supports “the biblical definition of the family unit” and that supporters of gay marriage were “arrogant.”

His statements caused public backlash and led to Chick-fil-A day where thousands flocked to stores around the country in support of the traditional definition of marriage.

Chick-fil-A issued a statement as it sought to move past the controversy, saying its culture was “to treat every person with honor, dignity and respect – regardless of their belief, creed, race, sexual orientation or gender.”

Truett Cathy was also known for his philanthropy, which focused largely on programs for foster children and other youth.

His survivors include his wife of 65 years, Jeannette McNeil Cathy, three children, 19 grandchildren and 18 great-grandchildren.