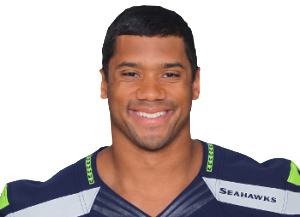 After the incredible performance, the reporters immediately stuck a microphone in front of his mouth and Wilson’s first thought was to thank God.

“God is so good,” Wilson said after Seahawks 43, Broncos 8. “We believed we would get here. At the beginning of the season I told our guys, ‘Hey, why not us?’ ”Then he talked about what his late father had always told him.

“He used to always tell me ‘Russ, why not you?’ And what that meant was believe in yourself, believe in the talent God has given you even though you are 5-foot-11, and you can go a long ways. That’s why I decided to play football, and I wanted to go against the odds a little bit.”

Wilson’s path to salvation was described in a recent documentary.

“I had a dream that my dad passed away and that Jesus came into the room and he was basically knocking on my door, saying, ‘Hey, you need to find out more about me,’” Wilson said. “So that Sunday morning I ended up going to church and that’s when I got saved.”

Unfortunately the dream was a foreshadowing of sorts because Wilson’s father died six years later.

Wilson also explained in the video that he was a “bad kid” and that his Christian faith helped him to mature.

“I think that got me through a lot of adversity … because I used to beat up kids and bite kids and do stuff all the time,” Wilson said. The star quarterback thanks God for the talent God has given him. “No one can stop what God has for you,” Wilson said.

Take a look at the video below to hear Russell’s testimony at the 7:20 minute mark.