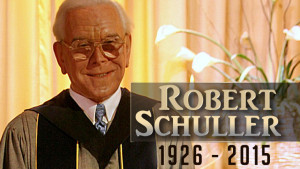 Robert Schuller, 88, has died according to multiple sources.

The Crystal Cathedral founder and Hour of Power host was in critical condition yesterday, and his daughter-in-law said he’d already made funeral arrangements.

“He gave it to my husband 10 years ago,” Donna Schuller told the OC Register. “Perfectionist that he is, I’m sure he has planned out and specified every little detail.”

Schuller was diagnosed with cancer in 2013, and has been ailing since then.

Schuller is perhaps best known for founding the Crystal Cathedral, which produced the Hour of Power TV show.

The ministry, founded by Schuller’s grandfather, began as Garden Grove Community Church at the Orange Drive-in Theatre in 1955, soon adding a 300-seat chapel four miles away. It later expanded to the larger campus. As the ministry grew, in 1970 the Hour of Power television program launched and aired in all 50 states by 1975. The program eventually became the most-watched religious program in the world, reaching 17 million viewers. The Crystal Cathedral was completed in 1980.

Please lift the Schuller family up in your prayers.