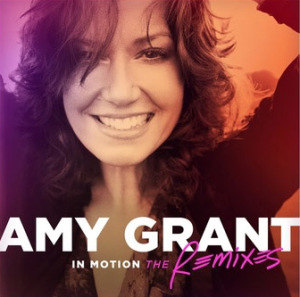 Six-time GRAMMY® Award winner Amy Grant is already receiving amazing response from DJs around the country for the remixed version of “Baby, Baby” as it takes the No. 1 Breakout spot on Billboard’s Hot Dance Club Play chart this week. GRAMMY®-nominated producer, DJ and remixer, Dave Audé, put a new spin on the hit, which originally topped the Billboard Hot 100 Chart for two consecutive weeks in 1991.

“Remixing ‘Baby, Baby’ has definitely been one of the highlights of my career,” Audé said. “I loved this song when it was released in 1991, and I still love hearing it today; you can’t say that about many records 23 years later. ‘Baby, Baby’ has crossed genres, and I’m hoping my remix will add yet another genre to this timeless classic.”

“Baby, Baby” is one of eleven songs on Amy’s first career remix album, In Motion: The Remixes, set to release August 19. The album will feature a collection of Amy’s biggest songs, remixed by well-known remix engineers and DJs. With hits like “Every Heartbeat,” and “That’s What Love Is For,” the album brings a new sound to the songs that have defined Amy’s three-decade career.

In Motion: The Remixes will be available for pre-order on July 22. When fans pre-order the album, they will instantly receive the remixed version of “Baby, Baby,” which Billboard exclusively premiered here last month.

In Motion: The Remixes follows the success of last year’s How Mercy Looks From Here, which debuted at No. 1 on the Billboard Christian chart, making it a record-setting 16th No. 1 album for Amy in the Christian genre. The album also shot up the Billboard Top 200 Chart, debuting at No. 12. As Amy’s first new studio record in more than a decade, the album featured guests James Taylor, Carole King, Sheryl Crow, Eric Paslay, Will Hoge and Amy’s husband Vince Gill.

About Amy Grant
As a teenager nearly 30 years ago, Amy Grant began embracing fans with a heartfelt singer-songwriter style, mixing elements of pop, folk and country. As Contemporary Christian music’s first major crossover success, she has earned three multi-platinum albums, six platinum albums and four gold albums. She’s scored ten Top 40 pop singles and seventeen Top 40 Adult Contemporary tracks as well as a string of Contemporary Christian chart-toppers while winning six GRAMMY® Awards and numerous Dove Awards. Her latest album How Mercy Looks From Here was released May 14, 2013 and debuted at No. 12 on the Billboard Top 200 Chart. Over Amy’s 25-year career, she has won six GRAMMY® Awards, 26 Dove Awards and has earned a star on the Hollywood Walk of Fame. Her career sales exceed 30 million albums worldwide.