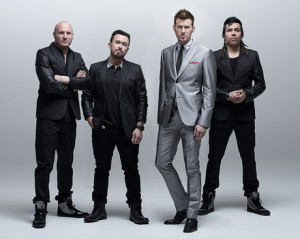 Building 429 is enjoying another hit single at Christian radio with “We Won’t Be Shaken,” as the song reached No. 1 for five weeks on the Hot AC/CHR chart and is currently No. 3 at AC Indicator.

The accumulative impressions from radio airplay has now reached over 121-million and shows no signs of slowing down with continuing big radio adds that include, WRBS/Baltimore, MD and KCMS/Seattle, WA. Building 429 is humbled and honored with the strong support from radio and their fans and Jason Roy, lead singer for the band, wanted to extend a personal note of thanks.

As Building 429 winds down their summer touring schedule, the band is gearing up for their co-headlining fall tour with The Afters, which also will feature Hawk Nelson and Finding Favour. The United We Stand 2013 Tour launches September 19 and will be a full stage production that will deliver high-energy, strong performances from all four artists.

The tour is sponsored by Liberty University and Food For The Hungry with tour updates available online at www.building429.com