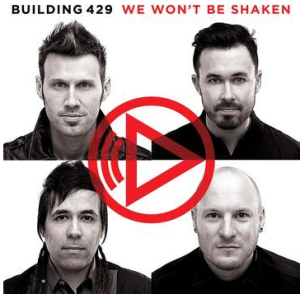 Building 429 generates more groundbreaking news, as its sixth career album from Essential Records, We Won’t Be Shaken debuted at No. 1 this week on Billboard’s Christian Albums chart and No. 53 on Billboard’s Top 200 Albums Chart.

This marks the first No. 1 album and No. 1 debut for the band, while first week sales nearly doubled early sales for Listen To The Sound in 2011. At the same time, the title track and current single has reached No. 5 on the Billboard AC Indicator chart, No. 7 on NCA Overall Chart and No. 2 on Hot AC/CHR chart. The song has accumulated more than 57-million impressions to date after only three months of radio airplay.

“Building 429 is one of the hardest working bands in our business and to see them reach No. 1 for the first time on the Billboard Contemporary Christian Chart is a proud moment for all of us at Provident,” says Jimmy Wheeler, Vice President of Sales, Provident Label Group. “The entire team is privileged to work with this band and we believe this is just the beginning of bigger things to come.”

Media has also embraced We Won’t Be Shaken with Worship Leader Magazine saying, Masterfully written and produced.This album is truly a joy to listen to. About.com exclaims, This reflective album will shake you if you’re breathing because it will really cause you to look at yourself, your walk and your real level of faith. Charisma.com says, This album will encourage listeners to dream God-sized dreams, and HMMagazine.com adds, Building 429’s new release, We Won’t Be Shaken, is a heartwarming record with songs that will be stuck in your head for days to come. Additional coverage includes: SiriusXM, Grammy.com, All Music Guide, Christian Post, NewReleaseTuesday.com, CCM Magazine (June cover story), iBelieve.com (July cover story), CBN.org, Group Magazine, CBA Retailers + Resources, Parenting Teens (Jason Roy blog), Nashville’s WTVF (CBS) and Tennessee Mornings (FOX 17).

Building 429 has been busy on the road supporting We Won’t Be Shaken with radio promo tours that covered several cities in Texas; Houston (KSBJ), Dallas and San Antonio (Air1) and Austin (Spirit 105.9), with media appearances on Good Day (Dallas) and Daystar (Marcus & Joni). This was followed by a Florida trip to Tampa (Spirit FM), Sarasota (Joy FM), Orlando (WPOZ) and Jacksonville (The Promise). The band then traveled through the Carolinas at Winston-Salem, N.C. (WBFJ), Columbia, S.C. (WMHK) and Greenville, S.C. (HIS Radio). WAY-FM stations hosted concerts and meet-and-greets in Louisville, KY, Nashville, TN, Huntsville, AL, and Birmingham, AL, where Building 429 appeared on Good Day Alabama and will have upcoming concert coverage in Birmingham Christian Family.

Building 429 added a quick trip to Nashville, TN the weekend of May 31- June 2 for K-LOVE’s first Fan Awards Weekend. Nominated for two major awards, Song of the Year and Breakout Artist of the Year, Building 429 also helped launch the event with a rousing and much heralded performance at Friday night’s kickoff concert, followed by a 2 ½ hour autograph session with fans at the Opryland Hotel on Saturday. That evening Building 429 headed to the historic Ryman Auditorium for the K-LOVE Fan Awards, which included multiple interviews on the pre-show red carpet. The group delivered another performance of Where I Belong for the sold-out audience as one of the show’s closers.

Building 429 heads into a busy summer of touring including major festivals and a stop in Chicago,IL later this month for appearances on Moody’s national radio show, Chris Fabry Live!, and LeSea Broadcasting’s Harvest Show and Live From Studio B.

For continual updates on Building 429 please visit online at www.building429.com; www.facebook.com/building429, and @building429.