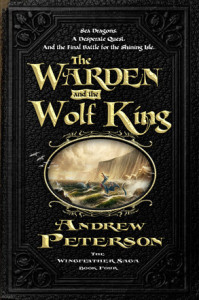 The reviewers are raving about Andrew Peterson’s fourth and final book in the Wingfeather Saga series, The Warden and the Wolf King. The project has just been honored as World Magazine’s 2014 Children’s Book of the Year and announced in the publication’s August 9th issue that can be viewed here.

“Our selection committee members were considering several worthy titles when I received a copy of The Warden and the Wolf King,” explains Janie B. Cheaney, Senior Writer at World Magazine. “Within a hundred pages or so, I realized that this was a real contender for World’s 2014 Children’s Book of the Year. Once they had a chance to read it, the committee agreed; our final vote was all but unanimous. Warden combines engaging characters, thrilling action, humor, and virtue in a cracking good story.”

Additional media outlets are also heralding The Warden and the Wolf King, calling it “smart, funny, and addictive” (CCM Magazine), “a terrific book” (Christian Fantasy), saying they “could not put this book down” (Christian Book Notes) and that the story “will resonate with readers for years to come” (Examiner.com). Fans at Goodreads and Amazon are joining in on the accolades, while giving the book 5-star reviews, saying that it’s “a must read!,” “Absolutely beautiful,” “An epic ending to an epic story.” There are several upcoming reviews and interviews for The Warden and the Wolf King that include Moody/Chris Fabry Live! and This Is the Day, Publishers Weekly, Worship Leader Magazine, Parenting Christian Kids, YouthWalk Magazine, Campus Crusade for Christ, and Leading Hearts Magazine, among others.

The Dove-nominated singer/songwriter has returned to the recording studio to begin work on After All These Years, a retrospective album scheduled to release in November on Centricity Music. The project is a collection of Peterson’s favorite songs from all his previous recordings, featuring new recordings of several earlier songs, as well as a few new compositions.