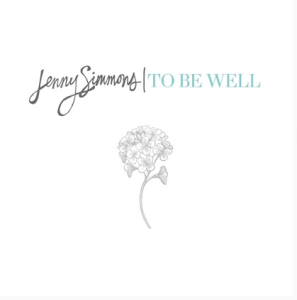 Veteran singer/songwriter Jenny Simmons, formerly of the group Addison Road, releases her first independent project, To Be Well: Songs for Hope and Healing, today. The digital EP reflects Simmons’ journey to be made well in her own soul, marriage and family.

Produced by GRAMMY nominated producer Paul Moak (Third Day) the 7-song project is a sonic blend of Addison Road-esque pop songs and the rootsy Americana that endeared fans to Simmons’ 2013 Fair Trade Services solo album, The Becoming. The new disc, however, pushes Simmons lyrically, as she attempts to capture the healing and hope that run wild alongside redemption through Jesus.

Simmons, who recently experienced a season of intense hardship, comments, “I had no idea that one year ago as I laid in bed and had a vision for writing songs of healing for people too weak to make it to The Healer themselves … that I would end up being the one who needed my friends to put me on a stretcher, carry me across town, climb a roof, dig a hole in the top and lower me to the feet of Jesus. But here I am.”

Such sentiment is reflected in songs like the anthemic opening track “Joshua Tree,” which sets the EP’s tone: While I’m breathing there is hope, while I’m hoping there is life, it’s Your water that I’m tasting at my feet and by your mercy I have all I’ll ever need, I am a Joshua Tree. Similarly, “Be My Healer,” inspired by a book called “Between the Dreaming and Coming True” by Robert Benson, is an earnest acknowledgment that true healing is found in surrendering one’s brokenness to Christ.

Another stand-out track “Not My Name,” written for women coming out of prison, human trafficking, rehab facilities and homeless shelters, focuses on healing through deliverance from the past, moving forward to embrace a new identity in Christ. Consequently, the EP will be given away to more than 1,000 women across the country who are walking into new life knowing their God-given name: Beloved.

“Sometimes people who most need daily reminders of hope, redemption and God’s unending love sung over them through faith-based music don’t have access to it,” says Simmons. “At a minimum, I have set aside a 1000 copies of To Be Well specifically for women in shelters, recovery centers, abuse programs and other vulnerable situations. I am praying that God will use this small gift in big ways in the hearts of these women.”

Simmons will debut music from To Be Well at select women’s events this fall. Furthermore, she will release a companion book, funded by an amazingly successful Kickstarter campaign in just eight days, that details her own story of heartbreak, change and waiting. Additional details are forthcoming.

For more information on Jenny Simmons and To Be Well, visit: www.jennysimmons.com. Purchase the album on iTunes or Amazon.