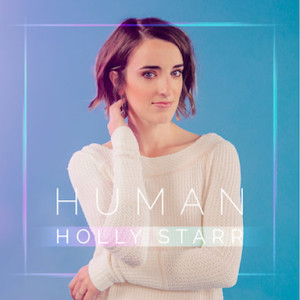 The album’s lead single, “Run The Race,” a percolating anthem of empowerment produced by Bryan Fowler (TobyMac, Mandisa), has amassed more than 1 million streams on Spotify and been featured on the service’s Top Christian Tracks playlist.

“From beginning to end, Human feels really true to me as a songwriter,” Starr shares of the project, which was produced by Matthew Parker and David Thulin, as well as Fowler. “It’s filled with moments from my life, and it captures the last few years in an honest way for me.”

Additional highlights of the album include the synth-laden second single “Bruises,” a vibrant pop track carrying encouragement for those battered by life’s blows. Spotlighting family relationships throughout Human, “Umbrella” is a love song for Starr’s husband, while the ethereal “Sailing” is a tribute to her late grandmother and namesake. Starr recorded vocals for “Sailing” on the morning of her grandmother’s passing, and the album is dedicated to her. “I’ve become more and more passionate about the reality that God calls us to care for the orphans and the widows,” says Starr, who helped care for her widowed grandmother in the last days of her life.

Starr will be performing selections from Human this fall as a special guest on Jaci Velasquez’s “The Trust Tour,” featuring Salvador frontman Nic Gonzales. Kicking-off September 14 in Denver, the tour will hit a total of 18 Western U.S. cities before wrapping October 8 in Los Angeles.

Since her debut in 2008, Holly Starr has become known for thoughtful songwriting and accessible pop melodies. A popular YouTube artist, her music videos and video blogs have collectively garnered more than 4.4 million views to date. A native of Quincy, Washington, Starr’s previous Artist Garden Entertainment releases include Tapestry (2010), Focus (2012) and 2015’s Everything I Need.