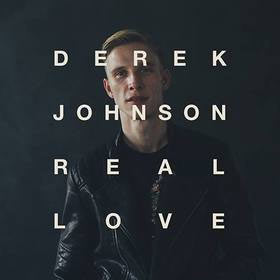 Real Love features 12 original tracks where Johnson utilizes his passion for message-driven songwriting to share his hope in the God of real and authentic love. He is a relevant voice to this generation for bringing intimacy and the joy of the Lord through praise and worship.

“My heart is to write songs that lead people to Jesus,” Derek Johnson shares. “Whether they have a relationship with Him and know His love or they are still searching for truth, my desire is that anyone who hears these songs will be brought into a deeper understanding of worship and the God of real love.”

Leading up to the release of Real Love, Johnson recently filmed three music videos for the singles that will release over three consecutive weeks, starting with the pre-order that begins March 17. The videos, captured at Sacramento’s historic Old Sugar Mill, will accompany the following songs leading up to the full album’s release: “The One We Love” (3/17), “Power In The Cross” (3/24), and “Real Love” (3/31).

Derek Johnson has been featured on Jesus Culture’s CD Emerging Voices, which hit No.1 on the iTunes Christian/Gospel chart. His song “I Belong To You” was also featured as a bonus track on Jesus Culture’s 2012 album Live From New York (with Martin Smith), which received a Dove nomination for Best Event Album of the Year.

As a member of the Sacramento-based Jesus Culture team since 2009, he’s led worship at every Jesus Culture conference since 2011 and has opened for Kim Walker-Smith and Jesus Culture Band at sold-out venues across the country.

Click below to view the Real Love album promo video: