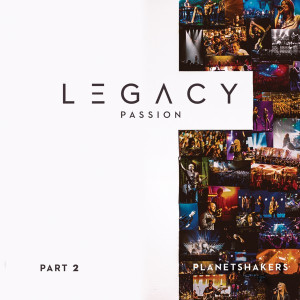 Over the past 20 years, Melbourne, Australia’s Planetshakers ministry has been hosting conferences that draw thousands from around the world for life-changing encounters with God.

The music at these events has been captured on recordings by Planetshakers Band, including two Dove Award nominated albums. On July 14, the team returns with Legacy Part 2: Passion, featuring new songs recorded live with 20,000 worshipers during the 4-day Planetshakers conference held this past April and broadcast by Daystar TV.

Legacy Part 2: Passion follows the spring release of Legacy Part 1: Alive Again, featuring songs recorded live in Manila, Philippines and Kuala Lumpur, Malaysia, and precedes the release of the Legacy album (CD/DVD) this September. The new EP will be available through all major digital platforms with a pre-order available now at Legacy Part 2. The EP includes live audio tracks and corresponding videos for the songs “Passion,” “Prophesy,” “We Speak Life” and “You Call Me Beautiful” with worship leaders Joth Hunt, Sam Evans and Rudy Nikkerud.

“It’s a great privilege to be part of the legacy known as Planetshakers,” says Evans, who along with her husband Russell serve as senior pastors of Planetshakers Church. “Our hope is that Legacy captures the freedom of praise and the power of the encounter because we can’t keep this experience to ourselves.”

Planetshakers will share new music and favorites like “The Anthem,” “Endless Praise” and “Nothing Is Impossible” this summer as they tour Europe with events in Austria, Germany, Switzerland, Slovakia, Netherlands, Sweden, Norway and Denmark. The team then heads to the U.S. for dates in Virginia, New York, Texas, Oklahoma, Ohio, Illinois, Minnesota and Nebraska.

Russell and Sam Evans began hosting Planetshakers conferences in 1997 and the first Planetshakers band was formed at that time to lead worship for the events. The couple later planted Planetshakers Church, which has grown to a 14,000-member congregation with five campuses in Australia and campuses in Cape Town, South Africa; Austin, Texas; Singapore; and Geneva, Switzerland.

“For 20 years, we have been passionately lifting up the name of Jesus and releasing the sound of praise,” says Russell Evans. “It started with a God-inspired idea to start a conference called ‘Planetshakers’… we didn’t know what Planetshakers was, we just stepped out in faith and did it.”

“Jesus spoke the language of the day, but He also backed it up with power… power to heal the sick, see breakthrough and restoration in people’s lives,” he adds. “That’s why we do what we do, to set an atmosphere where people can encounter Jesus.”