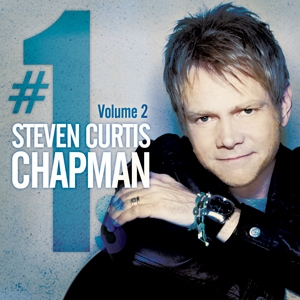 As one of Christian music’s most celebrated and acclaimed artists, Steven Curtis Chapman has sold over 10 million albums, charted 47 No. 1 singles, won five GRAMMY® awards, received 57 Dove Awards, and recorded more than 200 songs on 18 original albums.

This is only the third collection of hit songs in Chapman’s long career, with many of the songs appearing for the first time since their original release. Newly remastered, the songs on #1’s Vol. 2 represent 12 of Chapman’s albums, including For The Sake Of The Call, Signs Of Life, This Moment and his two RIAA certified platinum albums, Heaven In The Real World and Speechless.

#1’s Vol. 2 will take long-time fans down memory lane and introduce new fans to some of the best songs in Chapman’s storied career.

About Steven Curtis Chapman:
Steven Curtis Chapman has sold over ten million records including two RIAA certified platinum albums and eight RIAA certified gold albums. Along with his five GRAMMY® awards, Chapman has won an American Music Award, has recorded 47 No. 1 US radio hits and been awarded 57 Dove Awards, more than any other artist to date. Since his recording career began in 1987, Chapman has recorded eighteen projects. He has performed at the White House and has appeared on multiple national programs including Good Morning America, The Tonight Show with Jay Leno, Larry King Live, Fox&Friends, Huckabee, CBS Sunday Morning, and more via CBS, NBC, ABC, CNN, MSNBC, CMT, FOX News, the Hallmark Channel and E!. Chapman and his wife Mary Beth created Show Hope in 2001 and launched it in 2003, after bringing their first adopted daughter, Shaohannah, home from China. The ministry is a movement to help care for the millions of orphans around the world, helping to provide waiting orphans with forever homes by giving financial grants to adoptive families. To date, Show Hope is now an internationally recognized voice for orphan advocacy and has given more than 3,600 financial grants, affecting the lives of children from 50+ different countries, including the U.S. In addition to giving financial grants, Show Hope also empowers families, churches and communities with adoption and orphan care resources and advocacy efforts to change the world for orphans. The ministry is proud to celebrate its 10th year of service in 2013. For more information, please visit ShowHope.org.