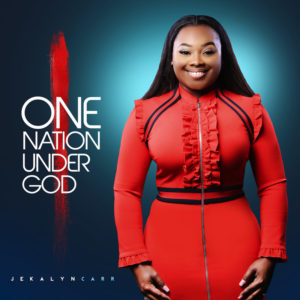 In support of her book and album, Carr continues to tour the country with concerts, radio interviews and upcoming television appearances in Detroit, Memphis, Nashville, Jackson, MS and Richmond, VA to name a few.

About Jekalyn Carr:
Jekalyn Carr, 20, is an acclaimed award-winning recording artist, musician, motivational speaker, entrepreneur, actress and author. Carr burst on the scene in 2013 and has released three chart-topping independent gospel albums; Greater Is Coming (2013), It’s Gonna Happen (2014) and The Life Project (2016). The latter garnered Jekalyn her first Billboard #1 album and #1 single (“You’re Bigger”), which also received GRAMMY, Billboard Music, Stellar and Dove Award nominations. In 2017, she made her television acting debut with a featured role on OWN’s original series Greenleaf and featured on its award-winning star-studded soundtrack. She’s also been named a POWER 100 by Ebony Magazine as one of the most influential people in the world joining Beyonce, Bishop T.D. Jakes, Lebron James, and Quincy Jones to name a few on that list. This year, she released her first published book You Will Win: Inspirational Strategies To Help You Overcome and her recent second consecutive Billboard #1 album (One Nation Under God) and #1 single “You Will Win.”