The soul-stirring anthem is currently parked at No. 14 with an ascending bullet on Billboard’s prestigious Gospel Airplay chart. 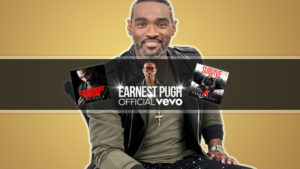 Portions of the heart-wrenching video were filmed on the campus of Tennessee State University. As Pugh sings from a soundstage, the reel chronicles the trials and tribulations of three people facing life-altering challenges. A woman is served divorce papers, a man is terminated from his job and another woman is on the bathroom floor, sick from battling cancer. Before the film is over, each subject decides to face and fight their respective losses (marriage, employment and good health) battle and triumph over them.

“My passion for recording this song was to spiritually rebuild my friends in Houston Texas after Hurricane Harvey’s devastation,” Pugh explains. “Survival is a mindset that one must possess based on knowledge that all things, good and bad, will work together for good. The storm was bad but God remains good to us on a daily basis.”

Pugh’s own home was nearly destroyed by the storm but he’s since renovated it. “I personally lost some valuable items in the flood but I held on to an old saying my Granny used to say, `It’s ok to have things, just make sure the things don’t have you. If you lose everything, you still have GOD on your side and you’ve got enough to start all over again.”

The video was directed by Ricky Burchell of B4Productions who is known for directing the independent films “Where is Good?” and “Love 101: Freshman Class.”