With the April 2018 release of his freshman album The Higher Experience (MBE/Tyscot) and landing at No. 4 on Billboard Magazine’s popular Next Big Sound Top 15 chart, the leading provider of online music analytics and insights, which ranks the 15 fastest moving artists weekly, merging billions of major social music data points for hundreds of thousands of artists from the most relevant streaming sites and social networks, social media phenom Kelontae Gavin is set to digitally release, The Higher Experience long-form concert video.

The 40 minute digital concert is available for immediate pre-order now and available for download or streaming August 24 (http://smarturl.it/5dqusa). Watch the official trailer below.

Lauded as a “live-wire” by New York Times’ Pop critic, Jon Caramanica for his stage presence and well-seasoned vocal gymnastics, The Higher Experience video concert not only showcases Gavin’s passionate faith and vast vocal range, but also his preacher-like oratorical skills. This riveting recording boasts an exciting blend of the Pop pageantry of Hillsong United coupled with the fiery Pentecostal fervor of a take-no-prisoners band.

Kelontae Gavin found viral fame in 2014 when he started singing in his high-school cafeteria – unbeknownst to him – someone recorded it and posted it online and within days amassed over 1 million views. Fast-forward, now at age 19 and with over 141K social media followers across his platforms, Kelontae is one of the most buzzed about new voices in music and has quickly developed a reputation for his frequent high-profile social media video live performances, which has gained him over 10 million views collectively.

His current radio-friendly single “No Ordinary Worship,” a robust ballad that comes with major key tonality, a catchy vamp and mixed acoustic and electric instrumentation has generated over 5 million on-demand audio streams to date and continues to gain major traction on multiple Billboard charts peaking at No. 5 on the Digital Downloads chart, No.10 on his genre-based Hybrid Songs chart (which combines airplay, streaming and sales data) and No.12 on the BDS Radio chart. 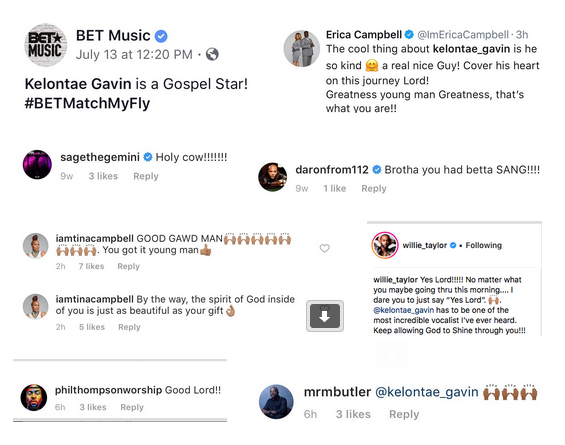