[Earnest Pugh puts on the gloves for new album “Survive”]

The album will pair Pugh with Kierra Sheard, Nikki Ross, John Paul McGee, and Sarg.  The hit singles leading the way are “Survive,” “Trade It All,” and an extended version of the Top 10 Billboard hit “I Need You To Breath.”

Pugh has high hopes for the album that sees him reunite with Blacksmoke Records founder Kerry Douglas. It was this early pairing that made Earnest Pugh a household name with hits like “Rain on Us” (2009) and “I Need Your Glory” (2011).

Says Pugh, “Kerry did a tremendous job in positioning me as an artist for many years and putting my name on the gospel music map,” Pugh says as he ponders what he considers a return home to Blacksmoke. While he and Douglas agreed to pursue unique opportunities for a period of time, Pugh has always recognized Douglas as an incredible business partner with an unparalleled pulse for radio and retail marketing and promotions.

“Working with Kerry has always garnered great results because we have great chemistry in the recording studio,” Pugh confesses. “Kerry and his team are dedicated to the process and bring creative ideas and an unmatched work ethic. We’re truly a winning combination and I’m optimistic about what God will allow us to accomplish with this new project.” Kerry Douglas agrees and adds that, “Pugh has always been a self-starter and an easy artist to mobilize and manage. It’s a win-win situation.”

Pugh’s soul-stirring new single, “Survive,” encourages and empowers those facing daunting circumstances. It was written by Charlotte, NC-based songwriter Kenny Curry and produced by Michael Bereal who also produced “I Need Your Glory” and “Rain On Us.”

The album is scheduled to hit stores and online retailers October 2017. Check out a snippet of the single “Survive” and view the tracklisting in the image below. 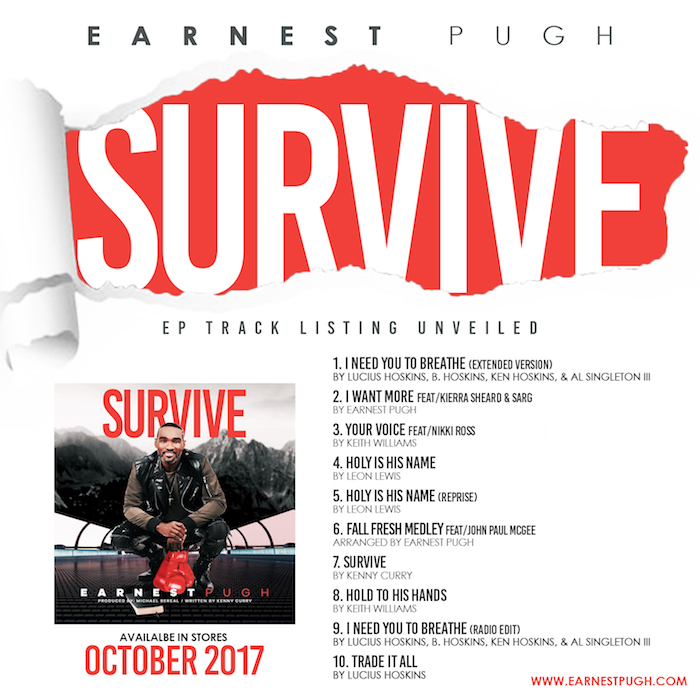