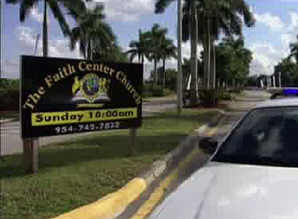 The man wielding the gun: Kelvin Adams, who Miller had dated and broken up with more than a year ago.

Miller, wounded and bleeding, managed to get her daughter and herself into her red sedan and drove a short way before stopping. On Monday, she was listed in stable condition at Broward Health Medical Center in Fort Lauderdale.

Adams, meanwhile, turned the gun on himself, ending his own life.

Sunrise Police continued the investigation Monday into what had led Adams, 56, to open fire Miller, 48, in the church parking lot.

At least 20 witnesses were being interviewed by police, said spokeswoman Michelle Eddy.

The church was apparently packed due to a scheduled appearance by popular television evangelist Benny Hinn.

On Monday, the massive parking lot was empty. Calls and emails to Pastors Ken Moorer and Henry Fernandez were not returned. The church, which conducts services at the former Sunrise Musical Theater, was locked.

At the Miller home, a girl who answered the telephone said her mother was doing OK and her sister was not hurt in the shooting.

At Adams’ home in Margate, a white pick-up truck with a Trinidad and Tobago sticker and a U.S. flag sticker sat in the driveway.

No one answered the door.