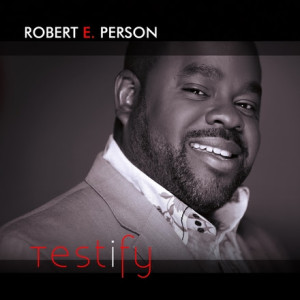 In 2012, Robert’s SOUL SANCTUARY album garnered the balladeer a number of accolades: The Gospel Blue M.I.C. Achievement Award – Artist of The Year, The Newsome Music Award – Male Vocalist of The Year and The DMV Christian Music Award for Gospel Jazz Artist of the Year. Robert followed his successful year with radio charting hits from SOUL SANCTUARY including “Clap Your Hands” and “Gotta Praise”. Robert also released one of his favorite classic hymns “Great Is Thy Faithfulness”, which boasted an immaculate vocal arrangement and a visually stunning companion music video.

Robert has returned to the studio this spring to work on his new album LOVE DIVINE that will release this fall. First glimpse of LOVE DIVINE is his new radio single “Testify”, available on digital music outlets June 10.

“This is a special release and I chose June 10 in honor of what would have been my parent’s 47th wedding anniversary,” Robert shares. “Testify”, written by Ayesha Daniels, is the first single from Person’s forthcoming album LOVE DIVINE. This beautiful worship song simply celebrates God’s Love Divine and was arranged by Robert and Jazz pianist and producer Allyn Johnson.

Robert’s innovative, pristine vocal abilities and crisp style recently landed him a steady gig with vocal icon and global pop star Josh Groban. Along with Robert’s regular tour dates and music ministry engagements, Robert has been on tour as one of Josh Groban’s hand-picked singers.

To keep up with Robert’s tour dates and to hear more forthcoming new music, log on to www.RobertEPerson.com.