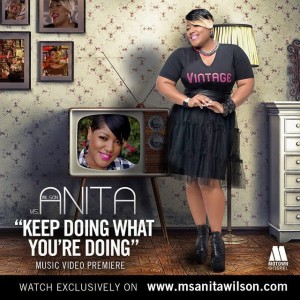 2015 Grammy Award nominee Anita Wilson exclusively releases her music video for her second single “Keep Doing What You’re Doing” via her website at www.MsAnitaWilson.com. The song continues to gain major radio airplay as it sits at #23 on Billboard’s Top Gospel Airplay Chart.

To watch the music video click here. To view the lyric video watch below: