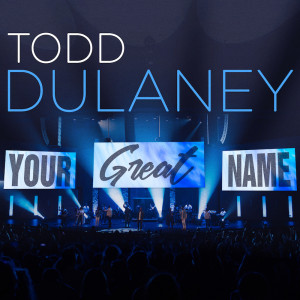 Anticipated to be the biggest anthem of 2017, Todd Dulaney’s newest single, “Your Great Name”, debuted #1 at Gospel Radio.

As an exuberant and uplifting song, “Your Great Name” stands as the lead single for Dulaney’s forthcoming album, entitled “The 2nd Encounter”, slated for an early 2018 release.

Dulaney, a former professional baseball player for the New York Mets, released his sophomore album, “A Worshipper’s Heart” in the spring of 2016 and it immediately debuted at #1 on Billboard, alongside the debut single “The Anthem”, which also shot to #1 on Billboard. Additionally, The Anthem went #1 at Gospel Radio for over a month and currently holds 114 weeks on the Digital Gospel Songs Chart.

It was Dulaney’s extensive high-profile concert appearances, multiple award nominations, and fast-growing fan base that brought him to the attention of Maximum Artist Management.

“Todd is a unique talent with a unique gifting for connecting with audiences from all walks of life,” states Solarek. “What he’s been able to achieve in just the past 24 to 30 months is awe-inspiring, but it’s just scratching the surface, we believe. He is an artist and a communicator who will impact culture for decades to come.”

Your Great Name is just a small glimpse of what listeners can expect on the upcoming album, The 2nd Encounter and the single is currently available at all digital retailers.